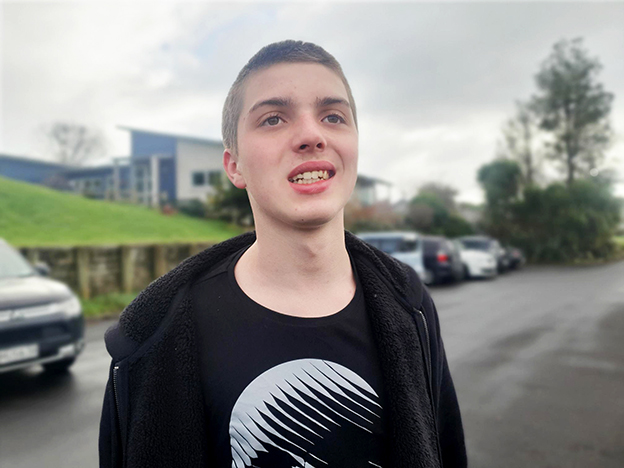 Goldfields Special School in Paeroa is asking for donations to get one of their students, Loki Bell, back to school. Photo: SUPPLIED

A Thames student has been stuck at home for a month after a car crash took away his only transportation to Goldfields School in Paeroa. KELLEY TANTAU reports

Kita and Loki Bell were sitting in the lounge of their Thames home when they heard the “smack and bang” of a drunk driver crashing into their parked car.
Fortunately, no one was injured, but the accident left both cars undriveable, meaning single mum Kita was no longer able to get Loki to Goldfields School in Paeroa.
“It is his favourite place. He’s very happy there,” Kita told The Profile.
Her son Loki, 16, has learning difficulties and has attended Goldfields for 10 years. The school was now rallying to get Kita a new car and therefore, get Loki back to school. They’ve opened a Givealittle page, which has seen more than $2100 donated so far toward their goal of $4,500.
“We want to make sure we raise enough [money] so that there is a registration, warrant of fitness, and insurance for a year,” senior school deputy principal Jillian Carberry said.
“The ideal goal would be to have enough money to have it insured for the rest of Loki’s time at school, so he doesn’t have to go through this again.”
Loki attends Goldfields three days a week, and Kita said he had learned so much and had formed valuable connections during his time there.
“He’s learned how to cook, and how to shave – everything. All because of Jillian and Matua Cam [McKenzie] at Goldfields,” she said. “But routine is paramount for Loki.”
Not having a car also meant the pair were unable to travel freely to pick up groceries, go to the library, or just get out of the house.
“It’s not a huge amount of money, so it shows that [Kita] is not in it to make a million bucks,” Goldfields principal Cameron McKenzie said.
“She’s just in it to get a safe car for her son.”
“I’m not looking for a Porsche or anything,” Kita added.
Both Jillian and Cameron said they missed Loki’s presence at the school.
“Loki comes into my office every now and then, throws his arms around my back, says: ‘lovely lady,’ and then leaves again,” Jillian said.
“I think the thing we probably miss the most is the humour that we get from Loki, because Loki says what all of us are thinking. There are many times where there has been a lot of laughter ‘cos Loki has come out with a gem.”
TO DONATE: email Goldfields School: office@gfs.school.nz, or visit: givealittle.co.nz/cause/help-me-get-back-to-school

Pets in good hands with new owners at Playful Paws