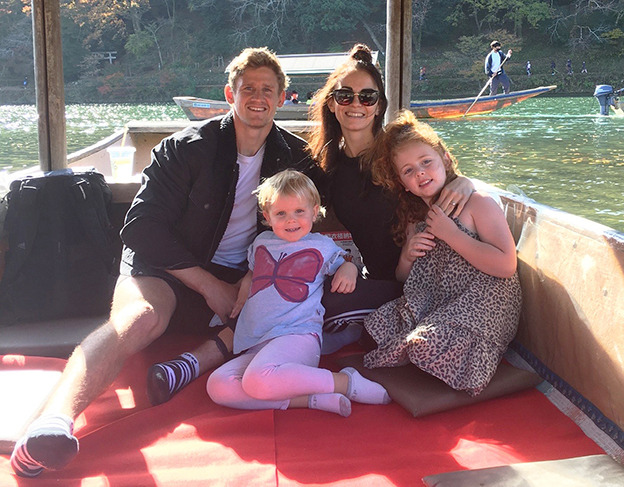 Thames rugby player Richard Judd was joined in Japan by his wife Jordyn and daughters, Taylor, 6, and Baylee, 4. Photo: SUPPLIED

Former Swampfox and Hurricanes half-back Richard Judd is back in the country after his first professional rugby stint in Japan.
The 29-year-old has spent the past year signed with the Suntory Sungoliath, a top league Japanese rugby union team based out of Fuchū, Tokyo.
He flew down to the capital on Sunday, where he’ll be gearing up for his first match with Wellington against Northland on August 7, as part of the Bunnings NPC.
Richard, from Thames, played 23 games for the Thames Valley Swamp Foxes, and in the 2015 ITM Cup season, he impressed as part of the Counties Manukau Steelers’ squad.
He joined the Bay of Plenty Steamers for the 2017 Mitre 10 Cup Season, before earning a spot in the Hurricanes’ extended training squad for the 2018 Super Rugby season.
He debuted against the Crusaders and was later confirmed as part of the Hurricanes’ 2019 team. In 2020, Richard signed for Suntory Sungoliath.
“Over there, their work mentality is unbelievable. The trainings were pretty intense right through the whole week. But we loved it, the culture, the food… I probably ate too much ramen,” he joked.
Richard was joined in Japan by his wife Jordyn and daughters Taylor, 6, and Baylee, 4.
With him in the Suntory Sungoliath team was All Black Beauden Barrett and former Wallabies midfielder Samu Kerevi. Richard said he learned a lot being around players such as them.
“I’d pick their brains quite a bit,” he told The Profile.
“And I’m probably more of a defensive half-back, more of a physical one than a running one, so I needed to work on more of a tactical game as well. I learned quite a bit of that over there, just more consistency in my kicking and passing, so hopefully I can bring that into this season with Wellington.”
The former Thames High student said he “definitely took the long road” when it came to rugby, but said playing for Thames Valley in The Heartland Championship gave him an insight into what could be.
He also caught the Thames Valley senior A and B semifinal on July 10 and said it was awesome to see Thames doing so well.
He’ll now be signed with Wellington for two years, and will work towards another Super Rugby contract.

DETAILS: The 2021 Bunnings NPC is the 16th season of New Zealand’s provincial rugby championships featuring 14 teams. It was previously dubbed the Mitre 10 Cup. The games will run until the end of October.

Change of the guard at Thames Markets