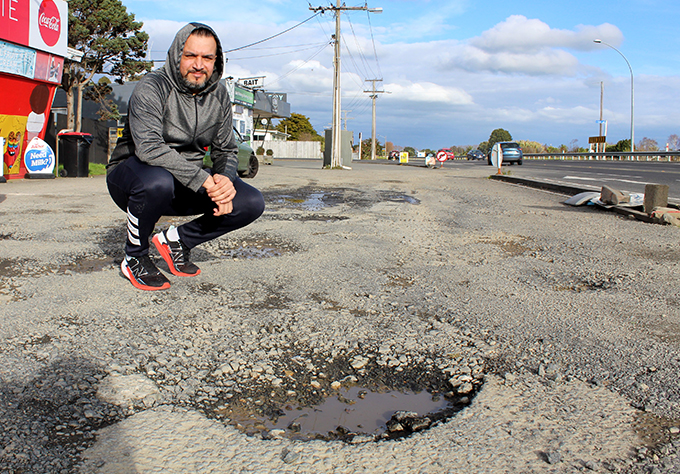 The dispute over potholes in a Thames superette’s parking lot could be put in front of the Ombudsman.
Harvinder Singh, the tenant of the Totara Superette along State Highway 25, has had no luck in getting Waka Kotahi NZ Transport Agency to share the costs of repairing the holes, which he said made the car park look “like a swimming pool” on a rainy day.
Since speaking to The Profile in June, he’s spent more than $1000 hiring equipment and metal to fill the holes, but he said it was only a “temporary” fix.
People continued to pull up to the shop and yell out to him and his wife, telling them to ‘fix the bloody driveway’, he said.
Waka Kotahi’s Waikato system manager Cara Lauder earlier said while the transport agency was responsible for maintenance on SH25, this section of the highway was within the 70km/h speed environment, and Waka Kotahi was only responsible for maintaining the road “from kerb to kerb”.
However, Thames-Coromandel District Council’s roading manager Ed Varley understood Waka Kotahi were responsible for maintenance of the entirety of the State Highway road reserve in this area, including the area in front of the shops.
He has provided Mr Singh with guidance about how he may proceed with the issue.
“Our council does have a Memorandum of Understanding with Waka Kotahi that within the 70kmh urban zone of state highways in our district where there is a verge, drainage, or footway, council has a maintenance liability.
“As there is no verge, drainage or footway in the area in front of the Totara shops, the council has no liability to undertake any maintenance. Any new works or improvements are the responsibility of Waka Kotahi, and are specifically excluded from the memorandum.”
Mr Varley said as this had already been discussed with Waka Kotahi, his guidance boiled down to suggesting Mr Singh approach the Ombudsman for a final resolution.
The Ombudsman handled complaints about Government agencies, such as the transport agency, and Mr Singh said approaching it was a route he was willing to take.
A Waka Kotahi spokesperson said the agency remained of the view that the work required at the Totara site did not sit under its jurisdiction, as it did not maintain private parking areas or driveways, because they were for the use of private landowners and their visitors.
“The policy applied at this location is applied consistently across the country for the state highway network,” the NZTA said. By KELLEY TANTAU

X-ray injury at School of Mines