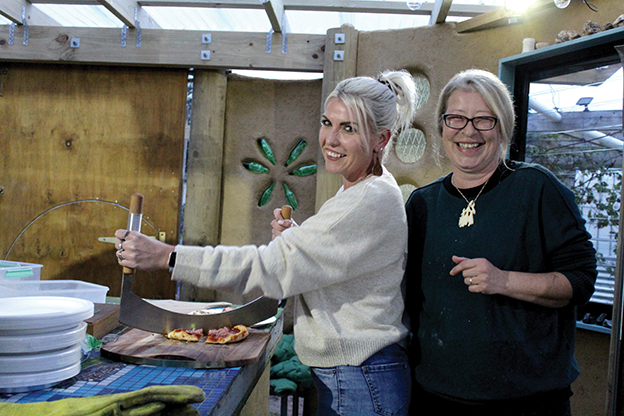 Pizzas are churning out of Waikino School’s Whare Manu space yet again, after a fire destroyed their original pizza oven and caused $68,000 in damage.
The blaze, which started from the school’s pizza oven and took out an outdoor classroom, occurred on November 15 last year.
But on Friday evening, the school community gathered around the site of the fire to celebrate the relaunch of a “bigger and grander” Whare Manu space – and to cook pizzas for the crowd.
The original pizza oven had been constructed by students, as part of the school’s effort to build sustainably, and was used almost daily.
This time around, the pizza oven and parts of its shelter are made out of clay, using bamboo framework gathered from the bottom of the school’s paddock.
Principal Jo Wheway said it took “six months of stomping clay” to get to this point.
“Every [student] has had at least one go at stomping and building and some of them kept coming back and back and back,” she said.
“They’ve all now had an exposure to earth building and its importance.”
Rose Tuffery, from Waihī, is an earth-builder who helped out the school with its Whare Manu design.
“The kids that don’t learn in the classroom, find a place doing these kinds of things,” she told The Profile. “And building with earth has got a lot of magical properties that you can’t explain, it just does good things for people.”
The school has been growing rapidly since Mrs Wheway started as principal three years ago, with around 90 students on the roll. By KELLEY TANTAU