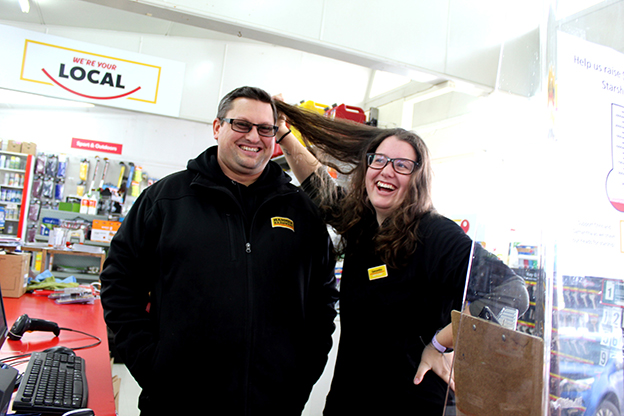 Come Saturday, Samantha Tweedale and Chris Spilsbury will be donning a new look, with the two Ngatea Hammer Hardware staff set to shave their heads for Shave 4 Starship.
Organised by the Ngatea Volunteer Fire Brigade, and supported by many within the Hauraki Plains community, the day will see men and women shave heads and faces, all for a good cause.
“Why not do it while you can?” Hammer Hardware owner Chris Spilsbury said. “Because one day in life, it might happen anyway.”
His colleague, Samantha Tweedale, who has worked at the store for six months, said she’d always wanted to take part in the fundraiser, but never had the courage to.
Now, having a good cause to support and the backing of her boss had given her that courage, she said.
“I’m a little bit nervous, but it is just hair, it grows back, and there are people out there who don’t get the choice to shave their hair. They lose it, and it’s not something they can control.”
Across the road at Ngatea Four Square, store owner Richie Saunders said he did not hesitate when he was asked to shave off his “messy” ‘do.
“When I was approached to do the shave, I’d basically only been doing the old Damian McKenzie cut on the sides,” he said.
Richie, who was expecting his first child the Friday following the shave, said family was a big driver in going under the razor.
He has two more boys in the family – aged 14 and 11.
“It’s such a worthy cause, and you never know when yourself or someone you know is going to need Starship, so if you’re in a position to spare a couple of dollars, don’t hesitate.”
All funds raised will go to Starship Children’s Hospital in Auckland.
“It’s not for us, it’s for Starship,” Chris said.
“The fact that we’re shaving our heads really means nothing, it’s the funds for Starship that mean the most.”
Donations can be made at either Hammer Hardware or Four Square, or through online banking into the account: 38-9002-0546884-08.
DETAILS: Shave 4 Starship, Saturday, June 26, 3pm at Ngatea Volunteer Fire Brigade, Dent St, Ngatea. By KELLEY TANTAU

Road ‘too dangerous’ for kids