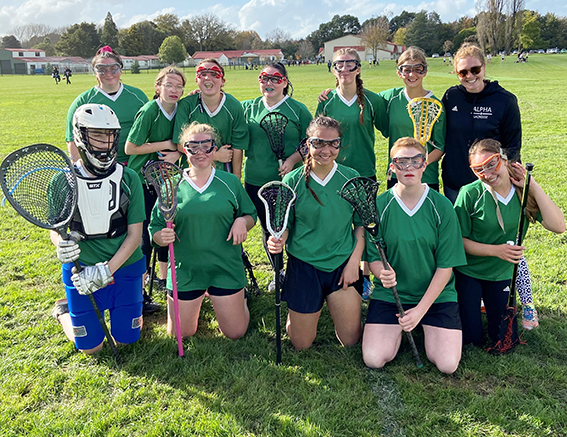 When 14 players from Paeroa College stepped out on to a Tamahere field clutching lacrosse sticks, it was a historic occasion, win or lose.
In its 63 years, the school had never had a lacrosse team and now, an all-girls squad was up against a team from Morrinsville, battling to catch and shoot a rubber ball into the opposition’s goal.
In the first match of the season, and Paeroa’s first match ever, the team came away with a 14-11 win, and no one was more ecstatic than coach Ursula Johnson.
Because not only was the game a momentous event for the college, but early signs showed it could also be the start of the sport’s take-over of the Thames Valley. According to New Zealand Lacrosse, lacrosse was one of the country’s fastest growing sports.
As early as 1885, teams were actively competing all over the country; however, the arrival of World War I and the dominance of rugby as New Zealand’s most popular contact sport took over and few, if any, records of the game in the mid-twentieth century existed.
“Lacrosse is a growing sport throughout Waikato,” Ursula Johnson said.
“It’s definitely gaining a lot of interest, but I think it’s about the accessibility to it.”
Ursula started playing the game when she herself was in high school.
She went on to represent New Zealand at the U19 world cup in Canada at age 17, and more recently, has been drawn to coaching and umpiring.
She coached the NZ U20 women’s team to the Asia-Pacific tournament in South Korea in 2017 and 2019, where the team placed third both years.
She also went to Canada in 2019 to umpire at the U19 World Cup.
The girls from Paeroa College have to travel to Tamahere, near Cambridge, each weekend to compete, and it was this sticking point which hindered Ursula in setting up a team earlier.
However, the time was now right and the girls were prepared, she said.
“Going forward, I want to be able to start a league in Thames Valley so the [girls] would have the opportunity to play in the local area. The sport has to be accessible for people to want to play,” she said.
Ursula, 31, who also doubled as the school’s head of science, said she had an “holistic approach” when it came to sport.
“I try to get players to give back, so, once they’ve got a certain amount of skill, it’d be their turn to give back to the people coming through. I’m hoping to be able to have that happen at Paeroa College as well, to make sure it is a sustainable programme, because if it relies on just me, it’s not going to be sustainable as a sport.”
According to a Sport Waikato participation summary, females aged between 15-18 participated in sport less than their male counterparts. Girls were also shown to drop out of sport quicker than any other defined group.
Ursula said about half of the Paeroa College team didn’t traditionally play sports before picking up a lacrosse stick.
“Getting more girls to play sports, that’s what it’s about,” she said.
“If they haven’t played traditional sports when they’re younger, it’s really hard to start in high school, but because lacrosse is a new sport, we tend to get a lot of girls trying it who don’t play sports traditionally. And I think the opportunity to be active, to be a part of a team, and develop connections is really important.”
The secondary school girls’ league will have its final match on August 22.
Paeroa College is currently putting forward its team in the B division, but Ursula said with more interest, more teams can be formed and players can improve on their skills.
“I’ve had so many positive experiences [from lacrosse] and I want them to have the same experiences that I know have helped shape my life,” she said.
“As long as the kids are doing what they enjoy, and they’re staying active, it’s a win.” By KELLEY TANTAU