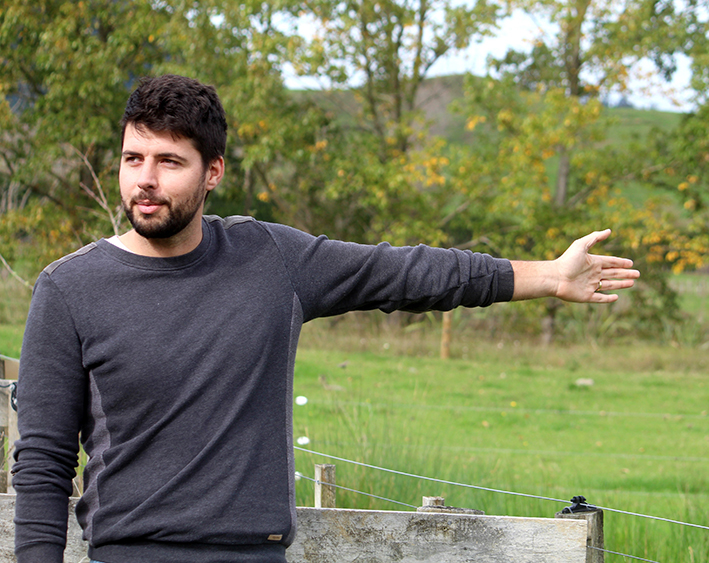 Sam Dunlop shows visitors around his Puriri farm, where he plans to plant hundreds of native trees. Photos: KELLEY TANTAU

He may not be a farmer in the traditional sense, but Sam Dunlop has plans to spend the next few decades seeing native trees on his land flourish and thrive.
In March, 2020, Sam and his wife Stacey purchased a 16.5-hectare piece of land in Puriri from Stacey’s dad, Bruce Stent.
“Bruce lived there for 30 years, and he still grazes the property out for beef. I’m not a farmer, but when you’ve got a block that size, you’ve still got to look after it,” Sam said.
“Bruce has done a lot of pest control, and the whole hill used to be gorse, so we will still have stock because otherwise it’ll get a bit unruly, but my focus is more on the trees.”
At a biodiversity field day held on May 24 and hosted by the New Zealand Landcare Trust, Sam led a group of farmers and regional council staff around his Neavesville Rd farm.
‘Biodiversity’ meant a variety of plant and animal life was present in a particular area.
Of the 16.5-hectares of land, Sam has ambitions to plant trees on 8-9ha, starting with a 0.5ha strip of wetland where an inlet of the Puriri Stream used to travel.
He has enlisted Waikato Regional Council and Landcare’s Waikato catchments co-ordinator Ric Balfour to help.
“I didn’t know where to start, and I didn’t want to get an excavator in there to just dig it up and make a mess, so I got Ric involved,” Sam said.
From that, Sam has since made a goal to establish a planting, maintenance, and pest control plan, and while initial planting should take one year, it may take up to five to ensure the trees were healthy and “working as they should”.
Sam grew up on a 10-acre farm in Kōpū, and said his dad Ian planted “hundreds and hundreds” of trees over the years.
He was hoping to do the same on his Puriri farm, and envisioned it to be a long-term, “40-year” project.
“It means I’ll be able to see a lot of the trees in a mature state, which not a lot of people get to do,” he said. “I love the area as well. Thames-Coromandel is my home and I want to live here forever.”
Ric Balfour believed Sam represented a lot of smaller-scale rural landowners, in terms of their level of interest and capacity to actively farm.
He said the latter was limited by having full-time jobs and farm sizes that were more lifestyle than production oriented.
“I thoroughly admire his approach to managing the biodiversity of his property and his keenness to influence his in-laws and their larger adjacent block.
“He is also interested in starting a catchment group which is another admirable trait that I am seeing more of in the farming community,” he said.
Landcare Trust was planning to host another workshop for interested people from the Neavesville and Maratoto valleys in July on how to start up a catchment group, and why they should get involved, Ric said.
“I would encourage more people to follow that interest, and by getting together, it makes a great community network.
“It also serves to connect people for mutual support, mental health, security and socialising. These side benefits to a catchment group are becoming evident across the country.” By KELLEY TANTAU