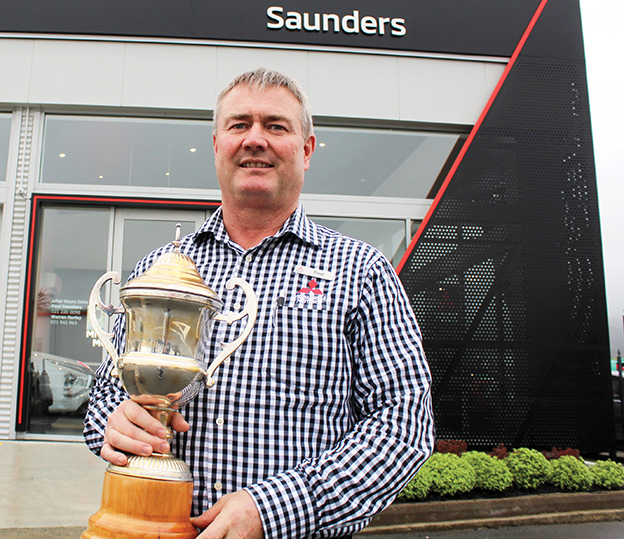 Saunders Mitsubishi in Thames has won the Managing Directors Award, which was given to only one dealership in the country. Owner Paul Saunders stands outside their new building with the trophy. Photo: KELLEY TANTAU

The past year has been a good one for Saunders Mitsubishi in Thames.
The car dealership came out of the Covid-19 lockdown with a state-of-the-art, purpose-built building on Pollen St, and within its walls, has continued to sell new and used cars locally and across the country.
The new building was roughly 510sqm and featured a 38-space car lot, and a full parts and service department.
It was designed by franchise owner Paul Saunders, who has seen the site transform since the days his Dad, Mike, owned a used car yard and workshop at the same location.
“Dad started the business in 1978, across the road where Fresho is now, and in 1985, he bought what was the Warwick Arms Hotel and built a car yard there. “I used to go down to the yard with him on a Saturday morning, and he would work, and I’d just play around the cars,” Paul said.
“I bought it in 2001, and in 2008, we took on the Mitsubishi name.
“He pops in here now and again and has a coffee and a gab and tells me about the old days.
“Dad’s very proud,” he said.
Paul grew up around the motor industry and was a mechanic by trade. He said now was a good time to be a Mitsubishi dealership.
“We’ve been flat-out since Covid, but supply is an issue. The new car demand is outstripping supply,” he said.
“Here, the Triton is our biggest seller, then the ASX, and Outlander. Right now, we’re getting inundated with people wanting electric vehicles.”
The announcement of the Government’s Clean Car Discount scheme, in which people buying new electric vehicles would be eligible for a discount of up to $8625 from tomorrow, had appeared to appeal to the district’s residents, Paul said.
Mitsubishi has the Outlander PHEV and Eclipse Cross in the e-range.
“We’re a small fish in a big sea, but we deal with the changes that arise over the years in the motor industry,” Paul said. “The internet now makes the world so much smaller, and repeat business is huge for us.”
Paul said the company prides itself on building and maintaining relationships with its customers, and in 2017 and 2020, they won awards for customer service, as chosen by the public. This year, Saunders also won the Managing Directors Award, which was given by Mitsubishi to only one dealership in the country.
“There’s about 37 full dealerships in the country, so it was really surprising, but the awards are all a team effort,” he said.
Saunders Mitsubishi sells new and used cars, and also has a fleet of rental cars, and a full parts and service department. It’s located at 201 Pollen Street, Thames. Ph: 07 868 8398. – KELLEY TANTAU