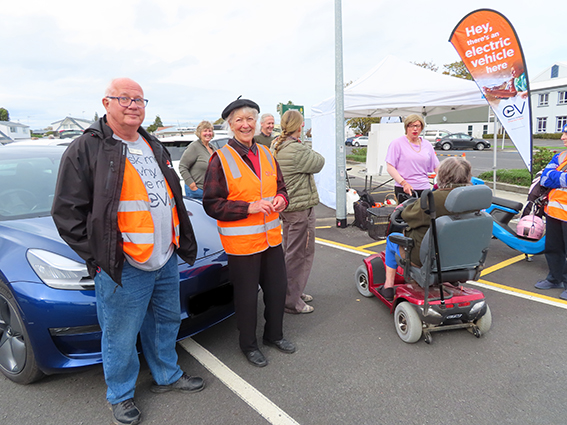 0FU3L – the number plate on the electric car said it all and explained the reason for the mini expo of electric vehicles held in Thames recently.
Thames Transition Town (T3) organiser John Leenman didn’t pull any punches when he gave the reasons why he owned a Tesla – no exhaust pipe and no carbon burned on travel.
“We are rapidly heading to the point of no return (with climate change),” he said.
“My four grandchildren are a big motivator. They are not going to live to our age unless we do something.”

About 80 people attended the expo, held at the Thames-Coromandel District Council car park, with about 15 electric vehicles coming from as far away as Auckland and Opotiki on show.
The range of vehicles included Nissan e-NV200, VW Golf, Kia E Niro, Tesla Model 3 and Model X and a Kona, as well as a camper van, scooter and electric bicycles, showcased by Matthias John, and his wife Elena, directors of local Thames business JollyBikes.
The couple have offered sales, service and rentals of e-bikes since 2015, and have seen a substantial growth in the popularity of electric bikes, also boosted by the Hauraki Rail Trail and other cycle trails.
Matthias believed on-road biking was still problematic for some people and trusted a more cycle-friendly environment in towns and cities lies ahead. Also present at the expo was a representative from the Better NZ Trust, Robert Nicholls.
He said the trust was a voluntary organisation to promote the uptake of electric vehicles in New Zealand by telling people what it was like to own one and help dispel some of the myths.
The vehicles on show were all state of the art – perfect for people who love high tech – some are now capable of self-drive and the range and battery longevity is improving year by year.
Charging too is simple, all you have to do is plug in your vehicle overnight.
For more information check out www.leadingthecharge.org or EECA.