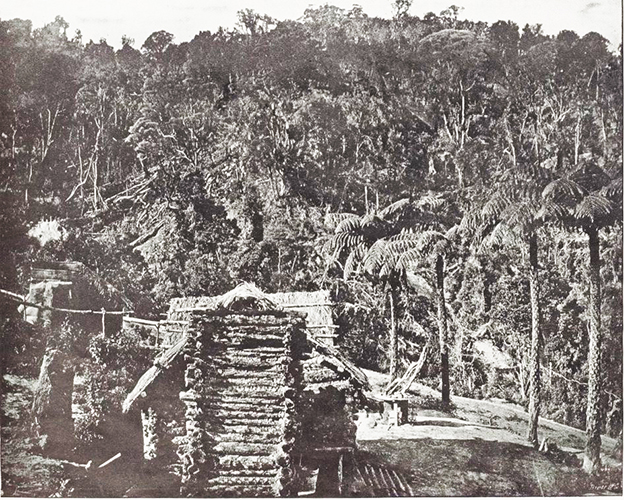 A miner’s hut, probably at Punga Flat on the Waiotahi spur. Photo: SUPPLIED

Thomas Comisky was in a desperate state of destitution when he came to the Waiomu hut of Thomas Steers in August 1870. Steers, sympathetic to the poor fellow’s plight, gave the man a job cutting firewood between Tararu and Te Puru and took him in to live with himself and a mate. Thomas Comisky at 43 did not seem to enjoy good health. He complained much of cold and pain. The men, in their rough and ready way, attended to him as well as possible. Thomas had lived with Steers for around three weeks when Steers went to Thames for a day or two leaving the unwell man with his mate. Steers returned home at an early hour on Monday and found Thomas to be very ill and suffering from weakness and pain, especially in his shoulder. Steers lit the fire and put the billy on, to make tea.
Thomas, after taking a little of the tea, was seized with a slight fit of vomiting and then lay back and appeared to go to sleep. The mate remarked on Thomas’s appearance, saying that he had had a similar fit the previous evening and looked as if he was in one again now. Steers examined Thomas and to his shock found that he was dead. The men put the body in a boat and took it up to Thames. The coroner found Thomas had died of an aneurism of the aorta. Thomas’s plight would not have been helped by the hardships of poverty.
Destitution at Thames was starting to dominate headlines.
The boom days of gold were over. The Nelson Evening Mail reported that “A complete exodus is taking place from Thames and men are walking about the country begging for work and assistance.” There were reports of ‘monster meetings’ of the unemployed and of three thousand starving diggers sending deputations to the Superintendent of Auckland asking for help. But the actual numbers of desperate men was called into question and the cries of destitution were seen as a ploy to get Ohinemuri opened for gold prospecting by a “clique of agitators at Thames”. This “professional knot” of troublemakers also tried to induce Dunedin authorities to send ships to take the destitute of Thames to Otago for work. Miners’ wages were swallowed up by public houses, billiard rooms and other less reputable resorts, and in other countries the wages the ‘destitute’ refused would be dazzling wealth said the cynics. The police sergeant was directed to take a census of the goldfields population to enable the government to judge how far relief should be given from public funds.
Work was offered in the construction of roads between Grahamstown and Tararu and the remainder of the construction of the road between Shortland and Puriri for 2 shillings a day. There was an outcry that men with wives and families could not possibly exist on such a pittance.
The official census found that of a population of 12,496 men, women and children on the field, 1223 were unemployed and just 13 were destitute. It was pointed out that there was plenty of work in the colony. None of this helped Thomas Comisky – ill, down trodden, his last days made bearable by the kindness of strangers. The Ohinemuri goldfield was finally opened in 1875. Thomas Comisky is buried at Shortland cemetery.