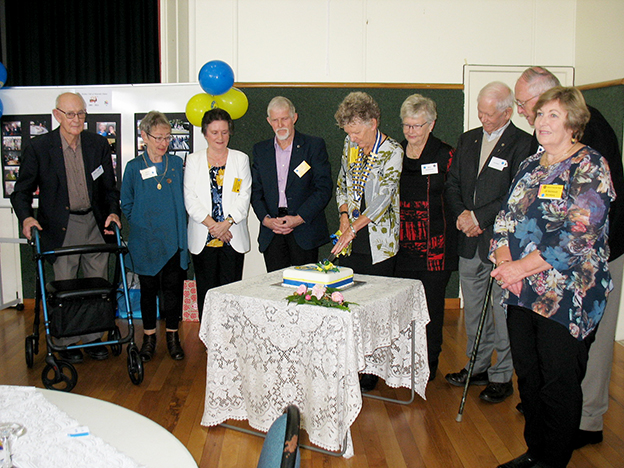 Hauraki Plains Probus president Helen Baker cuts the anniversary cake with some of the club’s past presidents. Photo: SUPPLIED

In 2001, 44 like-minded people formed a group for fun, friendship, and fellowship. Now 20 years later, that same group has grown to encompass 138.
For The Probus Club of Hauraki Plains’ 20th birthday celebrations, a luncheon was held in the War Memorial Hall in Ngatea on June 16.
Club secretary Jill McIntosh took guests through the history of the group, and said at some of the early meetings the club would have up to 100 members attending. Subscriptions were to be $20 dollars per member and that figure has not changed in 20 years. Membership was capped at 100 and then a waiting list started, she said.
Throughout the two decades, the club travelled near and far, with the first being to Coromandel town and the mussel barge.
They’ve been to the Wapiti Deer Park in Tirau; Norfolk Island; Tiritiri Matangi Island; Kaipara Harbour; Tauranga Harbour; and Waiheke Island. They’ve enjoyed attending shows, such as Mama Mia and Cats, and every year the club puts on a mid-winter solstice lunch and end of year Christmas luncheon.
“Springhill Corrections Prison was a highlight for many [and] the trip to the Tree Church and cruise of the Waikato River many of us will remember. It could not have rained harder,” Jill said.
“Wet and with umbrellas up, we stood there listening to the owner. Still, a very enjoyable day.”
Within the club, a mah-jong group has started up, as well as a 500 card group for men, which has proved to be a great success. “Over 20 years, our club is one of the strongest in New Zealand and has been extremely well run,” Jill said. “We all should be proud to be part of it in our special community here in Ngatea.”
For more info: call Jill on 07 867 7373.