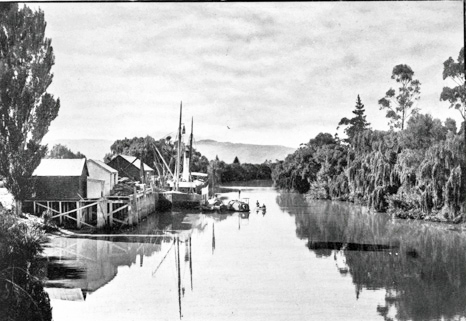 Robert Floyd had completely vanished. The distinctive looking man – a 20-year-old African American from Brooklyn, New York – was one moment standing near the galley door of the steamer Patiki as it loaded cargo and the next he was gone. There were several people on deck at the time he disappeared but no-one saw Robert go overboard and no splash was heard.
It was about 9.45 on a June morning in 1898 and the Patiki was alongside Fisher’s Landing, Netherton, on a run from Paeroa to Thames. Thomas Matthews, steward, called to Robert a couple of times to come to breakfast but got no answer. Shortly after loading, the steamer resumed her trip and a baffled Thomas started searching for Robert. Miss Etta McPeake, a Thames dressmaker, was feeling mystified too. When near the landing, she was sitting on the deck watching the men unload a plough whe she also observed a dog on the bank. Subsequently she heard it growl and then to her astonishment she saw the animal float past in the water.
About 12 minutes after Robert had been missed, when they had gone down river about three miles, Thomas informed the captain. The captain turned the steamer around. He sent a man up the masthead to ascertain whether he could see Robert on the bank anywhere, thinking that if he had fallen off he might have swum ashore.
When Thomas told Miss McPeake it was thought Robert had fallen overboard she said with alarm: “Oh! That is what I saw in the water.” Miss McPeake pointed out the spot and the area was dragged for more than two hours. Dynamite was discharged after which they started dragging again. This time Robert’s body was found near the spot indicated. When the Patiki came into Thames, Constable Hodgson received the body and lodged it in the morgue. Robert had nothing of value on his person and no property on board the ship. He had been a cook on the Patiki for three weeks and prior to that had been a cook on the Rotomahana. He was a cheerful man on good terms with everyone on board. He was single with no relations in the colony. He could not swim as far as anyone knew. Thomas Matthews, the steward, speculated Robert had been trying to shoot pigeons with his catapult and had over reached and fallen in. Thomas had looked and couldn’t find the catapult either. An inquest found Robert Floyd was accidentally drowned in the Waihōu River. He was buried at Shortland cemetery, his funeral attended by the employees of the Northern Steamship Company and many of the general public. A Miss Gibson sent a lovely wreath which was placed on the coffin of the man who was there one minute and gone the next.