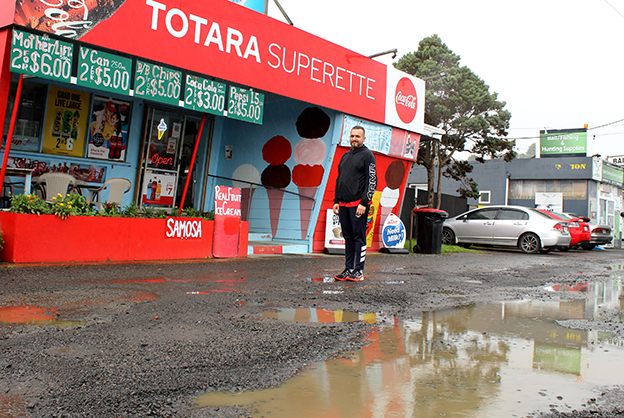 Harvinder Singh, the owner of the Totara Dairy along State Highway 25, says he has lost customers over the potholes, which on a rainy day, look “like a swimming pool”. Photo: KELLEY TANTAU

Large potholes outside the Totara shops are becoming a health and safety hazard for shoppers and a headache for business owners as arguments soar over who is responsible. KELLEY TANTAU reports.

Potholes so large they look like “craters” in a Thames parking lot have become a health and safety hazard after a man fell over one.
But while three businesses have all shown an interest in sharing the repair costs, they were waiting for the NZ Transport Agency to “come to the party”, though it refutes responsibility.
Harvinder Singh, the tenant of the Totara Dairy along State Highway 25, told The Profile he had lost customers over the potholes, which on a rainy day, looked “like a swimming pool”.
He said the accessway was no longer safe for elderly people to exit their cars and it was quickly becoming a health and safety issue.
Not only that, but people were pointing the finger at him and his wife for not doing something about it.
“We are getting stressed, because customers will come in and say: ‘It’s a lake out there, you need to get your sh*t together’. We have others that say they don’t want to pull up over here again,” he said.
“But they don’t realise we can’t afford to do it all on our own.”
Mr Singh has owned the business since February last year, but said he did not own the building or the land it sat on. He has contacted Waka Kotahi NZ Transport Agency (NZTA) about getting the potholes repaired.
He believed it was the landowner’s responsibility to pay for the surface repairs; however, he was willing to share the cost, he said.
“It’s not that I’m running away from spending the money, but I’m only a tenant, and they can’t expect me to pay for it all.”
The building’s owner, Kyle Whisker from Peninsula Motorcycles next door, has also contacted NZTA about getting the space repaired.
A quote he received from asphalt company ACO Waikato to repair the holes, provided to The Profile, stated it would cost $22,000 to stabilise and chip seal the 550sqm area.
Traffic management would also be required for two days at an estimated cost of $4,164.
A second quote from Higgins Contractors said the repair would cost $66,481.
“We’ve been battling since we moved in here about five years ago to try and get something done about it,” Mr Whisker said.
“We’ve contacted NZTA, because apparently they are responsible for 10m either side of the centreline of the road.
“So, quite a lot of the really bad potholes are within that,” he said.
“They say it’s the responsibility of the business owners.”
Mr Whisker said the area then became council-owned

land for roughly 4m before his boundary began, 1m from the front steps of the Totara Dairy.
He said a survey peg showed the boundary line; however, a Thames-Coromandel District Council spokesperson said all properties on that block fronted directly on to the state highway reserve, and there was no strip of council-owned property in between.
Mr Whisker said he was happy to pay for a portion of the repair costs, but the transport agency and district council needed to “come to the party” too.
“We have paid for countless trailer loads of metal to fill in the potholes, and Richard in the bait shop has also used his digger to fill these in out of our own pockets and time,” he said.
“If everybody chipped in, then it wouldn’t be such a big deal, and we could get it done.”
Richard Waterreus, from Early Bird Bait and Tackle next door to the dairy, has owned the business for two years.
Up until two months ago, he had maintained the dilapidated surface using his digger to keep it up to an “operational standard”. “To try and keep our customers happy, who come with boats and trailers, I’ve maintained it mostly by myself, but also a little bit by the current tenant of the dairy who does his best.
“But I feel that it’s not my responsibility to continue.” Mr Waterreus believed the landowner should pay for the “lion’s share” of the cost; however, he too wouldn’t be opposed to contributing.
“I believe it has to be shared, but also that NZTA and the council should have some part to play, because if those potholes were in the middle of Thames, they would not exist, because something would be done.”
NZTA Waikato system manager Cara Lauder said while the transport agency was responsible for maintenance on SH25, this section of the highway was within the 70km/h speed environment, where Waka Kotahi was only responsible for maintaining the road from kerb to kerb.
The potholes were located behind the drainage channel, in line with the kerb, which meant in this instance, the required work did not fall under Waka Kotahi jurisdiction.
“While the area in question is on state highway road reserve, it is being used as a driveway/access point and private parking area.
“Waka Kotahi does not maintain private parking areas or driveways as these are for the use of private landowners and their visitors.
“Waka Kotahi has offered to help co-ordinate our network outcomes contractor to undertake the repairs,” she said. “However, this would be at the cost of the relevant landowners or leaseholders.”