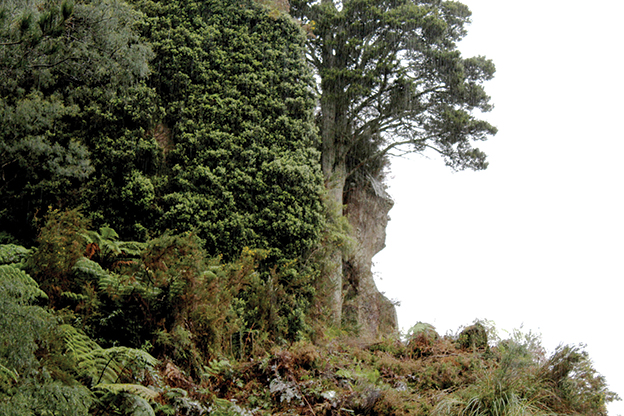 The iconic Queen’s Head rock between Waihi and Waikino can now be seen from the road along State Highway 2. Photo: KELLEY TANTAU

A rocky outcrop that bears the resemblance of former British monarch Queen Victoria can be seen from the road once again.
The landmark, dubbed Queen’s Head, located between Waihī and Waikino, has had gorse, macrocarpa, and pine trees cleared from around the cliff face that holds her.
It’s thanks to landowners Pete and Vicki Beveridge, Waihī Heritage Vision, and a grant from Hauraki District Council. According to the September 1990 Ohinemuri Regional History Journal, Queen’s Head was, in historical terms, priceless.
“She has been a landmark in the district long before records were kept or man arrived, and she would have been there long before her namesake ascended the British throne.
“She would have seen the first Māori arrive in the area, followed by miners as they walked into the district. Then, with the formation of the road, the packhorses, stage coaches and other traffic. Nowadays all sorts of motorised transport pass round her base,” the journal read.
“However, visibility of her is now somewhat obscured by a seedling pine tree and travellers passing through would be hard put to get a glimpse of her.”
That’s now changed following Pete and Vicki Beveridge’s successful plea to the district council for funding to clear the monarch’s face.
The couple live on the land on which the rock sits, and Pete told The Profile they’d looked into clearing the scrub, but knew the costs of the traffic management needed to partially close the road, as well as an experienced arborist, would soon add up. They were encouraged to apply for council funding, and were supported by Goldfields Railway, whose train passes by Queen’s Head, as well as members of the community.They received almost $10,000 from the council to get the job done.
“You say ‘Queen’s Head’ to a lot of people in town and they don’t know what you’re talking about, but there’s an awful lot of people who do,” Pete said.
“They say: ‘When we used to come home as kids, we’d be looking out for Queen’s Head, because that’s when we knew we were home’.”
Pete and Vicki are both involved in their local community, and Pete is the son of former Waitakere ranger Bill Beveridge, who, alongside Bill’s father Joe, had a walking track named after him in the Auckland ranges.
Pete had found he had the same inclination for history.
“We’re quite happy to be the custodians of [Queen’s Head].
“It could quietly erode over a couple hundred years, but at the moment, it’s still here and recognisable for what it was in the first place,” he said.
“There she is, behold the queen.” By KELLEY TANTAU

Road ‘too dangerous’ for kids