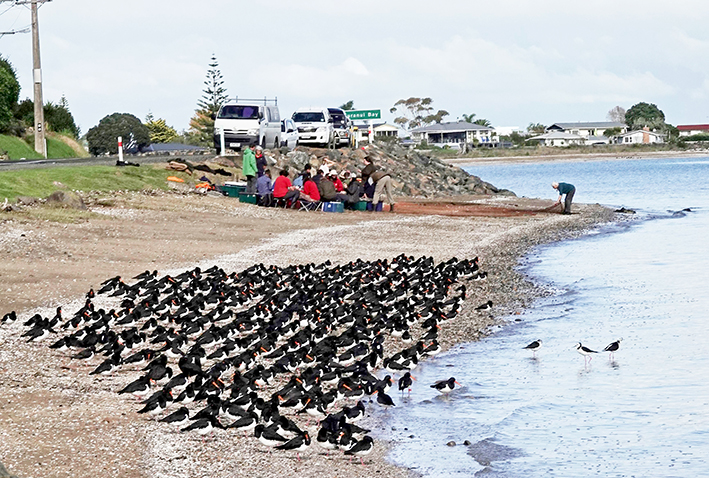 Oystercatchers being caught and tagged at Kuranui Bay. Photo: SUPPLIED

Department of Conservation researcher Emma Williams is confident the ET she’s holding in her hands really will phone home.
That’s because she’s just fitted this South Island Pied Oystercatcher (or Sipo for short) with both a highly visible red tag with the initials ET and a new generation tracking device, a sort of tiny solar-powered phone, which is already talking to an app on her mobile phone.
It’s all part of a joint project between The Department of Conservation (DOC), Landcare Research, Birds NZ and the Pūkorokoro Miranda Shorebird Centre to find out more about the birds in order to provide better protection because their numbers are declining.
ET was one of 115 of the birds recently caught in a net at Kuranui Bay, just north of Thames, and fitted with the red tags. In addition, 22 were fitted with the tracking devices.
All the birds were safely released.
Sipos breed in riverbeds and farmland in the South Island and then, as winter approaches, fly in their thousands up to warmer places like the Firth of Thames.
To find out more about their behaviour, hundreds of Sipos are being fitted with brightly coloured tags with letters on them – the ones for the Firth are red but other areas have different colours, in the hope birdwatchers who see one will record the colour and letters and advise DOC. In addition, a few are also being fitted with the tracking devices so the routes they take from their nesting areas in the south to their holiday homes up north can be plotted.
In another part of the project, predator control is being carried out on selected nesting areas.
Birdwatchers who spot the birds can contact DOC at bandingoffice@doc.govt.nz or ring the Shorebird Centre at 09 232 2781.