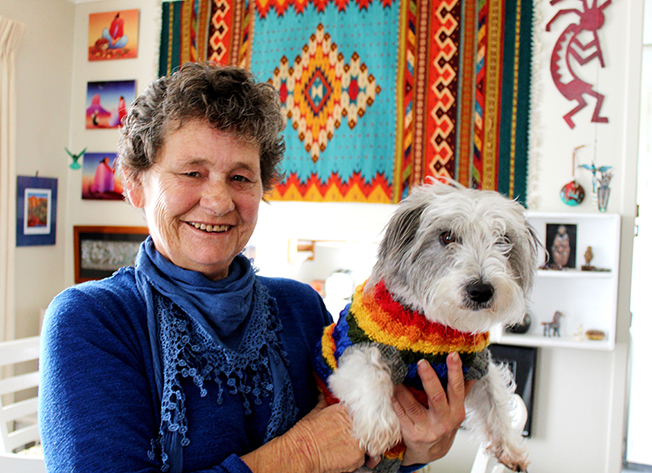 Diane Hewitt with her pooch Chyka, who is modelling one of the colourful dog sweaters. Photo: KELLEY TANTAU

The colours inside Diane Hewitt’s Thames home act as a reminder of where she has been, and where she is going.
There’s the coloured rug pinned to the wall from her trip to Arizona, the box filled to the brim with knitting yarn, and not to be missed is Diane’s dog Chyka, who walks around the house in a sweater the colours of the rainbow.
“Years ago, I had depression, and I found that colour lifted my mood and helped me through it,” Diane tells The Profile.
Chyka, a jack russell x bichon maltese, sits on her lap, the colourfully-striped sweater she’s wearing handmade by Diane keeping her warm on the brisk winter’s morning.
Diane started knitting dog sweaters for a friend, and soon found there was a market for high-quality, hand-knitted, wool sweaters for the country’s rainbow communities (lesbian, gay, bisexual, transgender, intersex or queer people).
She’s since created a brand, Proud Pooch designer dogwear, in support of these communities.
“My primary focus when I started was to create beautiful sweaters for the rainbow communities, but it evolved from there to include absolutely everybody,” she said.
In March, Diane had a stall at Woof – The Auckland Rainbow Dog Show, and for three weeks she sold her sweaters at the Thames Market. All types of different people stopped to take in

the vibrancy of her wares.
“People who are interested in the sweaters aren’t necessarily in the rainbow communities,” she says. “Colour lifts my mood, and I think it does for a lot of people.”
In constructing her garments, Diane “knits to fit” after obtaining two measurements from the dog: neck to tail, and chest.
“I’ve unashamedly approached people on the street and I’ve asked them if I could use their dog as a model.
“I accosted a chihuahua whose owners really wanted a military-style sweater, so I sourced a Major epaulette off a uniform, and I knitted the sweater in green and brown, and between the shoulder blades of the chihuahua, I stitched on this authentic Major symbol. I’ve had absolute fun with it,” she says.
The sweaters are made from pure New Zealand wool and range in price from $60 for a very small breed, to $80 for a medium-sized breed, such as a spaniel. Diane says she can also knit for larger dogs by order.
“It started off as just average knitting, but then you meet people who want different things, and I’m always up for the challenge,” she said.
“I’ve got three university degrees and I knit dog sweaters,” she says with a laugh, “and it’s the most rewarding thing I’ve done.”
For more info: Find Proudpooch Aotearoa Designer Dogwear on Facebook or Ph 020 4070 2434. By KELLEY TANTAU