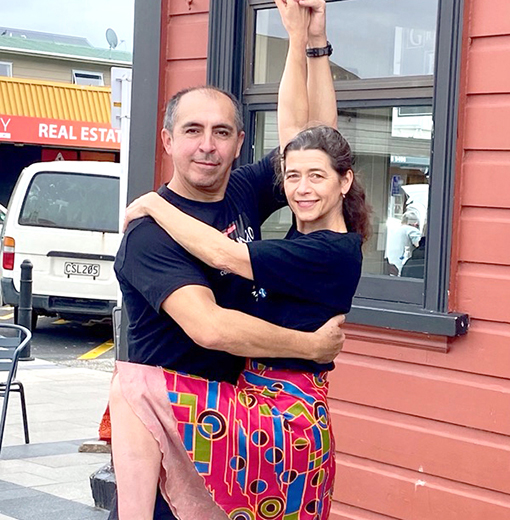 Jana and Sergio Corvalan will bring their passion for tango to the people of Thames. Photo: SUPPLIED

For Jana and Sergio Corvalan, the tango is more than just a dance.
It’s a way to connect without words, for two to move “together as one”.
“It’s communication without talking,” Jana said. “I’m so tired after talking all day, so [dancing the tango] is a moment of relaxation and peace.”
Jana and Sergio met on the dancefloor in Argentina in 2016. Both had various experiences with the tango, with Sergio having been a dancer since he was five-years-old, and Jana teaching it to colleagues in California.
But when Jana met her husband, he opened her horizons, she told The Profile.
“I saw it not just as a dance, but I saw the background of it, the culture, and saw that everybody could do it. The therapeutic effect, that’s the beauty of it,” she said. “Tango is something special.”
The pair have recently moved to Thames, and their passion for the dance has since inspired them to share it with the community. They will host classes inviting people to celebrate and learn the tango, with their next lesson being held on Friday.
Jana said the tango could be used to improve mental and physical wellness, as well as posture.
“When people usually start to dance [tango], I can see on their face that it’s addictive,” she said.
Tango is a partner dance that originated in the 1880s along the Río de la Plata, the natural border between Argentina and Uruguay.
There, it is widely popular to see couples dance the tango in public.
“It’s very common that people dance on the street, and it’s something that attracts tourists to Argentina,” Jana said.
The couple started performing publicly in Thames around six weeks ago, most notably at the Thames Market, and wanted to see how people reacted and if they enjoyed it.
And when they weren’t dancing the tango, Jana worked full-time as a GP with Te Korowai Hauora o Hauraki, while Sergio was taking classes to learn English.
They will be teaching tango at Lotus Realm, Pollen St, Thames every Thursday for the next six weeks between 7pm-9pm.
Jana encouraged people of all ages, genders, ethnicities, and fitness levels to participate.
“When you start dancing, you discover your capacities,” she said.
“Each individual has their own way of expressing emotions, and it translates to their body language, so in tango, we don’t really talk during the dance.
“It’s communication with embrace.” By KELLEY TANTAU