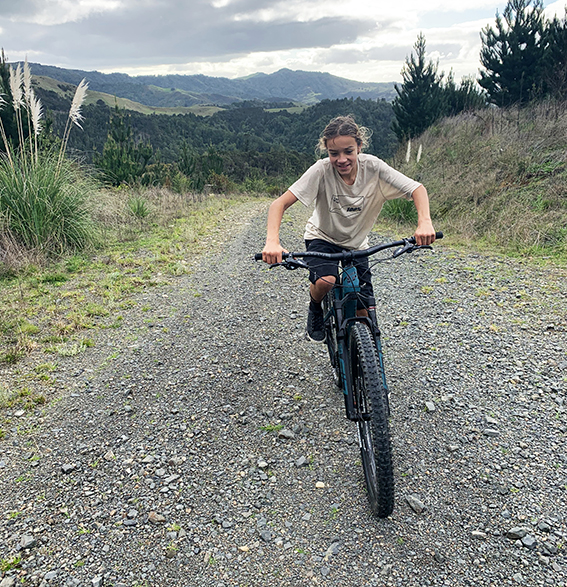 Alongside his dad Chris, Quinn Harris, 14, will ride 400km to raise funds for the 40-hr Famine. Photo: SUPPLIED

A Hauraki Plains teen is preparing to ride 400km in 14 hours for the 40-hour Famine.
Quinn Harris, 14, will share the ride with his dad Chris, with the pair starting the challenge this Saturday and hoping to finish up within the 14-hour mark.
Quinn, a Year 9 student from Hauraki Plains College, was inspired to do something different for the World Vision fundraiser after his sisters, Fairven and Morgan, also stretched their imaginations.
“Together we did no furniture for 40 hours in 2019,” Morgan said.
“Last year, I did 40 acts of kindness over the 40 hours, and when Fairven was in primary school, she stayed outside on our lawn with a friend and lived off of a backpack for 40 hours.
“They forgot to pack a can opener and had to use a rock from the creek by our house.”
Quinn’s idea to cycle 400km using an indoor trainer called a Zwift, was “by far the biggest” task, Morgan said.
The World Vision 40-hour Famine runs from June 25-27, and for more than 45 years Kiwis have taken up the challenge of not talking for 40 hours, going without screens for 40 hours, or, undertaking the traditional: barley sugars and fruit juice for 40 hours.
The funds raised will help protect children threatened by the hunger pandemic in sub-Saharan Africa. Quinn and Chris have already raised nearly half their goal of $1000 for the event.
“Quinn normally does skids and jumps – he’s never really on the ground – so this is the complete opposite of what he normally does,” Chris said.
“But I’ve always told him we don’t know what we’re capable of until we do it.
“Quinn’s a very capable young man and I’m sure he’s going to do it just fine.”
To donate to Quinn and Chris, visit: my.worldvision.org.nz/ss/VGrIpx/quinn-harris. By KELLEY TANTAU