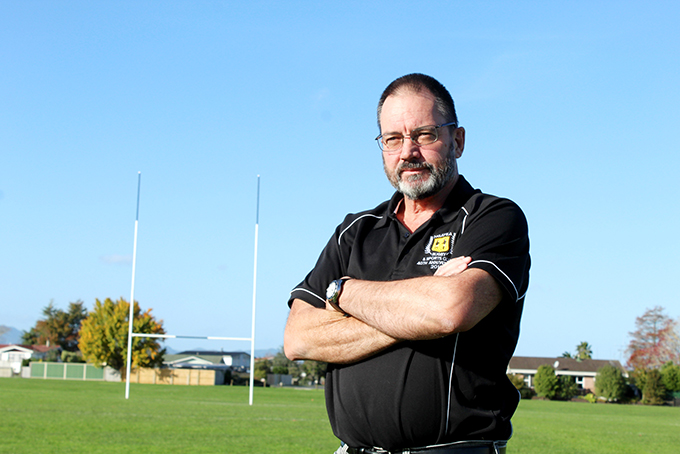 There’s no need to visit Rotorua for its mud baths, we’ve got them right here – at Hugh Hayward Domain.
That’s the belief of Doug Connors, who is hesitant to market the Ngatea field as a new spa destination, but the state of the grounds, especially after weather events, has left him no choice.
“We know it’s not the best of dirt or drainage, we know that this is the Hauraki Plains, but we’ve had comments that it’s one of the worst playing fields in the Thames Valley,” he said.
Mr Connors is the president of the Ngatea Rugby and Sports Club, and on behalf of the codes who train and play on the field, made a submission to Hauraki District Council as part of its long term plan (LTP) hearings on May 18-19.
Mr Connors said the club had been told “multiple times” over the years the upgrade and repair of the number one field at the domain would be included in council’s next LTP; however, “nothing ever happens, and no feedback is ever received”.
He told The Profile he understood council had plans to make the upgrades in 2025, but waiting another four years could be injurious to players using the field.
“There are ruts from where the earth has sunk from where the soak drains have been installed [and] this is a major health and safety concern due to players twisting ankles,” he said.
“The lack of grass on the field will be like playing on concrete.”
Mr Connors also understood an irrigator which cost council around $15,000 has been used only once since it was purchased five years ago.
The irrigation system was deemed “not fit for purpose” and would take around 16-18 hours to irrigate one rugby field, he said.
There were also no lights on the grounds, which meant the junior league had to travel to Waitakaruru for their evening games.
Mr Connors was now calling on council to bring forward any plans to repair the field to 2022. He also asked for a better irrigation system and new lighting.
“Get it so it’s a good playing field for all codes, not just for rugby, but for touch rugby and athletics,” he said.
According to Hauraki District Council’s parks and reserves manager Paul Matthews, the council acknowledged the purchase of the irrigator was “a mistake”.
They have plans to sell the unit and replace it with something more appropriate after discussions with the Hugh Hayward Domain Users Committee.
Mr Matthews also told The Profile the fields were audited every six months by a turf consultant, and the consultant had never referred to their condition as either “poor or unsafe”.
“In which case, we would close the field,” Matthews said. “Having said that, we’re aware the field will need a complete renovation sometime in the next few years.”
Council has allowed $50,000 in its draft 2021-31 LTP for the field’s renovations for 2024-25.
It has deliberated on all the submissions to its draft 2021-31 long term plan and, once it’s adopted, will respond individually to all submitters on the outcomes of the points they have raised.
It’s expected the LTP will be adopted at a council meeting on June 23. By KELLEY TANTAU