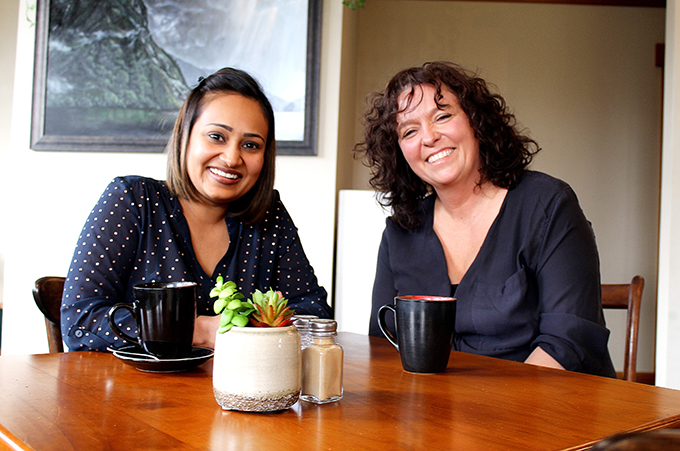 Rue Singh, left, and Suze McElroy are organising an event to bring cultures together in Thames. Photo: KELLEY TANTAU

Coming together over plates of food while tapping into Thames’ diverse community is the essence of an event aimed at the town’s newbies.
Kiwi Fusion, a female-only group established by Eve Macaskill Hemming and Rue Singh, was created to encourage women from different cultures to meet people and feel welcome in Thames.
On July 1, they’ll be hosting a “food lover’s celebration of culture on a plate” – and they are inviting women of all backgrounds to attend.
“I think with ladies as such, we bond better when we’re eating or drinking a glass of wine,” Rue said.
“Women put a lot of love into cooking food for their family and friends, so this is a way to share time together,” Kiwi Fusion attendee Suze McElroy added.
Suze and Rue have attended the two Kiwi Fusion events held so far, and said they were “blown away” by the diversity of its participants.
Thirty-five people attended the first event, and ethnicities ranged from Japanese, Italian, Polish, South African, Canadian, Indian, Māori, and Polynesian, they said.
Rue was originally from Durban, in KwaZulu-Natal, South Africa.
She moved to New Zealand in 2017 after visiting the country for a working holiday.
“I spent a year, loved it to bits, went home, but knew I needed to come back. Something was calling me back here,” she said.
And when it came to food, Rue said some dishes were sentimental, such as her mum’s samosas, or Bunny Chow, a dish that originated among the Indian South Africans of Durban.
“Back in the day, my colour skin wasn’t allowed to go to a restaurant, so we had to go in the back if we wanted to get food. So, we were given bread with the insides scooped out, and it was filled with curry or gravy, and the inside of the bread was put on top of it, and that was your meal if you wanted to eat out,” Rue recalled.
“Now, we have turned that into something we take pride in.”
Suze, who grew up in central Auckland, said her passion for taking part in Kiwi Fusion was to make friends.
She moved to Thames at the beginning of the year.
While there was still some hesitancy about admitting she was from the city, Suze said the people of Thames had shown her hospitality.
“All in all, everyone has been really welcoming, and perhaps people realise now that new people inject new life into a town.”
DETAILS: Kiwi Fusion Food Lover’s Celebration, 5.30pm-7pm, July 1 at Saint George’s Parish Hall, Thames. Bring a plate of food and a gold coin for hall hire. RSVP: kiwifusionthames@gmail.com. By KELLEY TANTAU