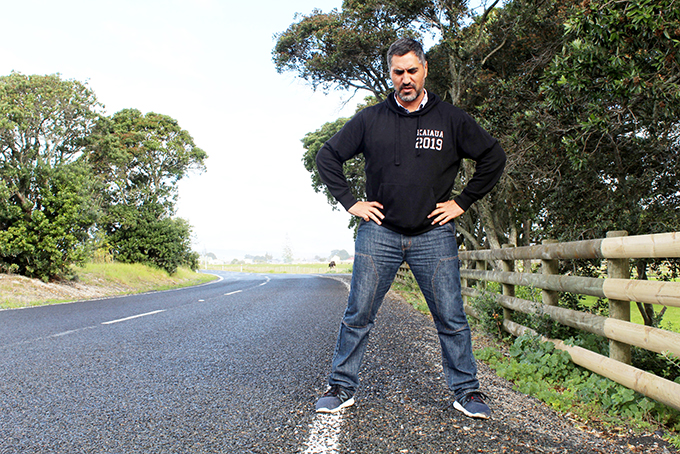 Kaiaua School principal Karlos Bosson is concerned for the safety of his students who ride bikes to and from the beach-side school. Photo: KELLEY TANTAU

Kaiaua primary students have been clipped by cars and knocked off their bikes while riding home from school. KELLEY TANTAU investigates the school’s plea for action.

Standing on the road between the white line and Kaiaua School is a feat not for the faint of heart. There is only a mere metre between the line and the fence, and its access for pedestrians is made difficult by the road’s downward slope, which makes it near-impossible to manoeuvre for students riding their bikes.
It’s the same towards the settlement of Whakatīwai, a kilometre away.
There is no footpath either side of the road, and children have been clipped by cars as they rode their bikes to and from school.
One incident even saw a child knocked off his bike, Kaiaua School principal Karlos Bosson said.
“The driver of the van did stop and see if he was okay, picked him up, threw the bike in the back of the van and drove him home.
“As principal, straight away you think of the health and safety requirements of a child being picked up by a stranger, and then you consider how it happened: being involved in an accident.
“These are things that we’re facing.”
Another child was riding her bike and wanted to cross the road to where there was a footpath. On her way, she fell off and landed on the road. Luckily, those students were okay but the close-calls have prompted the school and community to act.
Issues regarding the lack of a safe pedestrian access from the full primary school on East Coast Rd to Whakatīwai were brought to Hauraki District Council’s attention by concerned resident Roger Barlow at council’s long term plan hearings last month.
In his submission, Mr Barlow said the Kaiaua School student voice was “very compelling and frightening”.
He also said the roadworks completed on the road in front of the school earlier this year highlighted the lack of a safe access for pedestrians.
“Before, I used to be able to walk along the fenceline. Now, I just don’t try anymore. It’s just too dangerous,” Mr Bosson told The Profile during a visit to the Hauraki school.
“When we take the children across the road to the beach, we now have a person up on the bend that will signal down when it’s safe to cross, and the kids, basically, walk very briskly,” he said.
“That’s a procedure we need to iron out: we want all staff to wear high-vis vests.”
Mr Bosson has been principal at the school for three-and-a-half years. When he started there, no students rode their bikes to and from school. Now, close to a third of the roll did.
“It’s a large number, and the risk factor is huge,” he said. “Remember when you were a kid and could easily ride to school?

40 years and going strong at Saunders