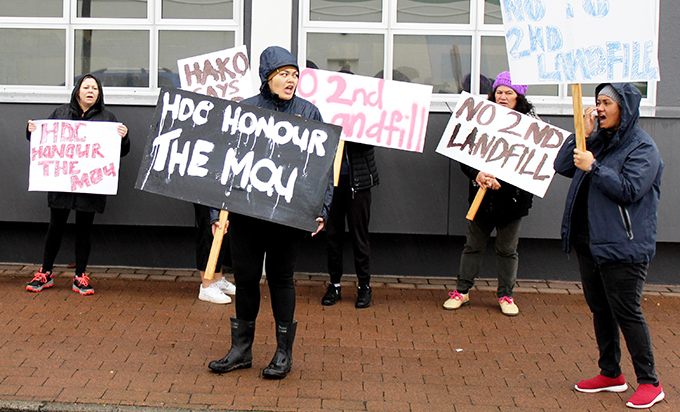 A fight for mauri and maunga is weighing heavy on Ngāti Hako’s shoulders.
Outside Hauraki District Council’s Paeroa office, the Iwi calls for the restoration of their Tirohia maunga (mountain), Rae o Te Papa, which has been used as a landfill for the past 21 years.
The plea takes the form of a peaceful protest, and occurs concurrently with a hearing of Waste Management’s application to construct a second landfill at the site.
“We’re here to fight for our rights, for them to leave our maunga alone, and to get our mauri back,” Hine Clarkin tells The Profile.
“Hako is always going to say no.”
Waste Management’s resource consent with the Hauraki District Council and Waikato Regional Council asks to establish, operate and maintain a second landfill site for the collection of around three million cubic metres of waste over an area of 15ha.
The proposed landfill cell is estimated to provide between eight to 10 years of additional waste capacity.
But Ngāti Hako kaumātua Paranapa Otimi says the proposed second landfill goes against a memorandum of understanding (MoU) agreed to in 2003 between the Iwi and former landfill owners HG Leach.
He says it was agreed the landfill was not to be extended and once at capacity, it was to be closed.
“We believe we’ve suffered since the day [the application] was first granted back in 2001.
“Our personal view is that the council thought we had forgotten about it… we haven’t.”
In a statement, Hauraki District Council said it only saw the MoU a few months ago.
Mayor Toby Adams said Ngāti Hako reached an agreement with former owner HG Leach in 2003 that the Iwi would withdraw its objection to the company’s resource consent application on the condition there would be no further landfilling or extension of quarrying beyond the limits described in the application, and that no activity would occur beyond 2038.
HG Leach then sent the proposed wording for the condition to council and Ngāti Hako, and asked for it to be included in the consent, council said.
However, Mayor Adams told The Profile the condition was left out of the consent.
“Regretfully, no parties picked up on the omission in the condition put forward by HG Leach,” Mayor Adams said in the statement.

“Unfortunately, due to a disconnect between the intent of an MoU between Ngāti Hako and HG Leach & Co Ltd in 2003 and the wording of a condition that was subsequently put on the Tirohia landfill resource consent, the covenant that was registered against the landfill site does not reflect what was agreed between the two parties.
“They thought they had secured a time and scope limit on the landfilling at Rae o Te Papa but the covenant that was
registered against the titles by the council in good faith did not prevent further quarrying and landfilling on the property within that time frame, which is what was clearly agreed to in the MoU.”
Mayor Adams said council was not denying responsibility for the omission, and was willing to work with the Iwi to help “remedy that action”.
Council had no power to withdraw the current consent application or make a decision on the outcome, but was willing to support Ngāti Hako in an application to rectify the covenant, he said.
A statement released by a Waste Management spokesperson said because the resource consent application was in an active hearing process, it was not appropriate to comment on specifics.
However, the company was “respectful of mana whenua’s position and wants to work through concerns constructively”.
“Technology used in modern, engineered landfills has evolved significantly to protect Papatūānuku,” the statement said.
According to its website, the existing landfill at Tirohia is expected to be full in the next five years.
To continue to manage and dispose of the region’s waste, the company is proposing to build new landfill cells within the boundaries of the land it already owns.
If the additional space for waste receipt is approved, it is expected the company will stop accepting waste at Tirohia between 2032 and 2035, depending on the volumes of waste received.