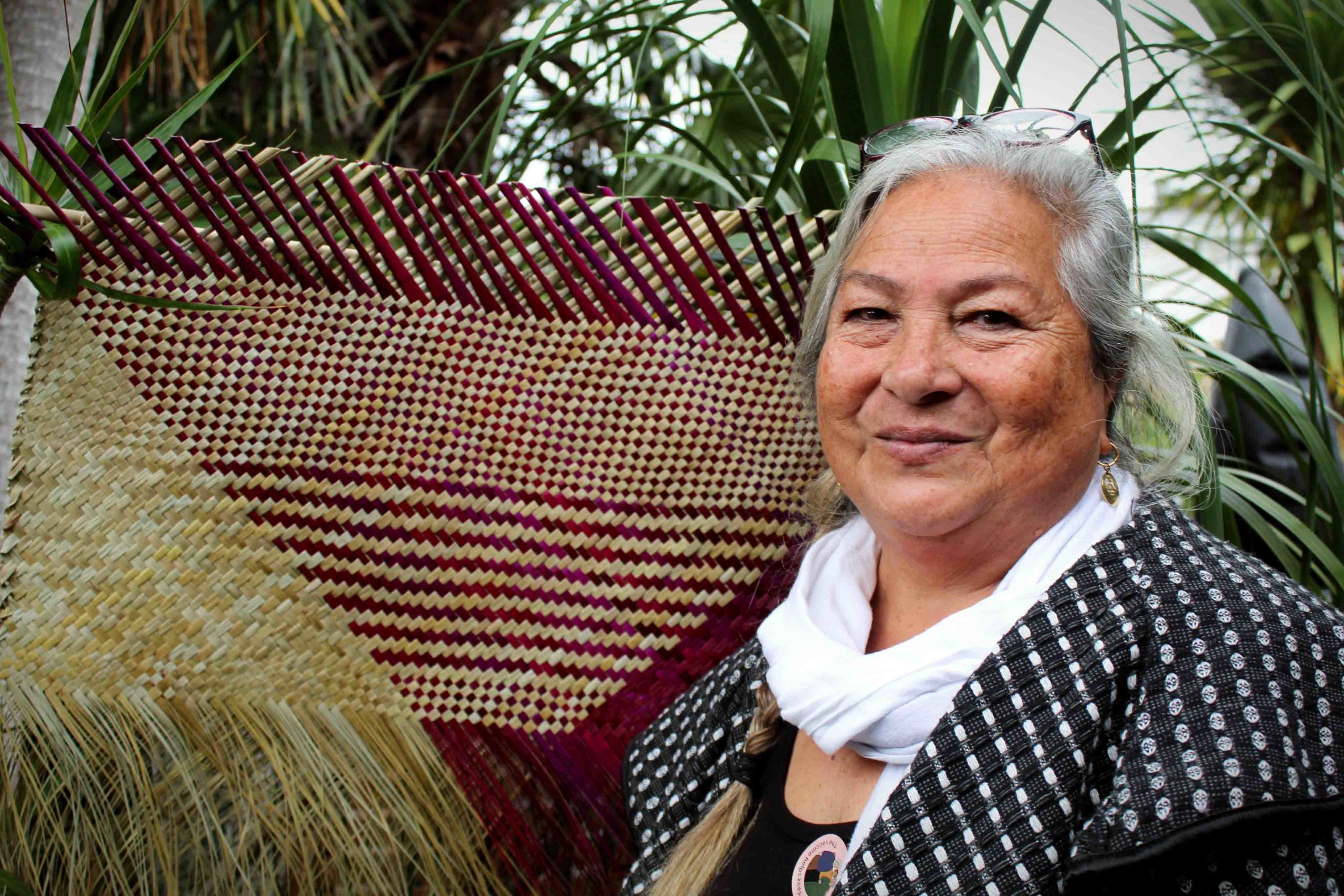 For her service to the community and culture of Kiribati, her home country, Thames woman Louisa Humphry was named an Honorary Member of the New Zealand Order of Merit. Photo: KELLEY TANTAU

Louisa Humphry travelled more than 4000km across the Pacific to start her life in New Zealand.
But home was never far behind.
For her service to the community and culture of Kiribati, her home country, Louisa was named an Honorary Member of the New Zealand Order of Merit, as part of the Queen’s Birthday Honours announced Monday.
The Thames woman was born “under a coconut tree” in Kuria, Kiribati, an independent island nation right on the equator.
“I came to New Zealand when I was nearly 17, and I was lucky enough to get a scholarship, and went to school in New Plymouth. I stayed at Scotlands hostel.
“That was really a culture shock,” she told The Profile.
“The language was a huge factor, because even though my written English was perfect, I couldn’t stand in front of the class and tell them a story.
“It took me nearly a year to be able to sit and converse with people.”
To Louisa, the food in New Zealand was strange, the milk was strange, and even the water was strange.
“Our water was really quite brackish in the islands, and it had a salty taste to it, so when we were given water here, I used to put a little dash of salt in it,” she said.
She also had to have three hot water bottles placed in her hostel bed to keep her warm, considering the climate was so different to Kiribati.
“But I found that people were my saving grace,” she said.
Louisa met her husband Jack Humphry when the latter was volunteering in her home country, and the pair got married on the island in 1973.
“I come from a family of 10, so I said to my dad, you are not to give me any money, we have to start on our own… so we did,” Louisa said.
“We travelled from Kiribati on a boat to save money, and I was seasick as a dog.”
While on a bus in Fiji, heading toward a plane which would take them to New Zealand, Jack and Louisa serendipitously met a Kiwi who offered Jack a job at his welding company in Glen Innes, Auckland.
“We didn’t have a car, but we went to a pawn shop, and took our watches off, our jewellery, gave them our gramophone, and had enough of a deposit to get a flat and bed and that was it,” Louisa recalled. “We lived on coffee and bread and cheese until Jack’s first pay.
“And you really do appreciate life when you do it like that.”
Throughout her time in New Zealand, Louisa helped set up a Kiribati community group in Auckland, and was part of the group who established some of the first Kiribati Independence celebrations and the body now recognised as the New Zealand Kiribati National Council.
In the 1970s, she was a key advocate for Kiribati’s presence in Auckland Pasifika festivals. She was a member of the group who established the first Pacific health clinic in Hamilton, K’aute Pasifika Trust, and she also managed the Hamilton Combined Christian Food Bank from 2004 to 2019. She has been involved with the wider art community to preserve and share weaving practices to maintain Kiribati traditions.
As an artist herself, she has exhibited throughout New Zealand, and recently one of her and Whiritoa artist Kaetaeta Watson’s works – Otintaai – was acquired by Te Papa museum.
“In Kiribati, you weave because you need to live. You weave for a purpose: a basket to put your food in, a mat to sleep on… I’ve now gone and ventured into decorative things, and my mother would often say: ‘What’s that for?’ and I’d say: ‘It’s pretty’, and she’d say: ‘But it’s useless’.
“It’s nice to retain your own culture, so you’re not lost,” Louisa said.
“I always tell the kids who are born in New Zealand but are I-Kiribati, don’t ever lose your identity, your language or your culture. It’s everything that you are.”
Louisa said she enjoyed working with children, and on June 11, she’ll be making flax stars with the students of St Francis School in Thames for their Whānau Day.
Some of the works will then go on display at the St Francis Children’s Matariki Arts Exhibition at The Vibe, Mary St, from June 24.
Louisa said receiving the honorary MNZM – people who were not citizens of a Commonwealth realm were given “honorary” membership – was humbling.
“When you do things for people, you don’t expect anything [in return],” she said.
“You do it because you want to do it, so when something like this happens, it’s overwhelming; somebody feels you deserve it.”

Queen’s Head a sight to behold once more