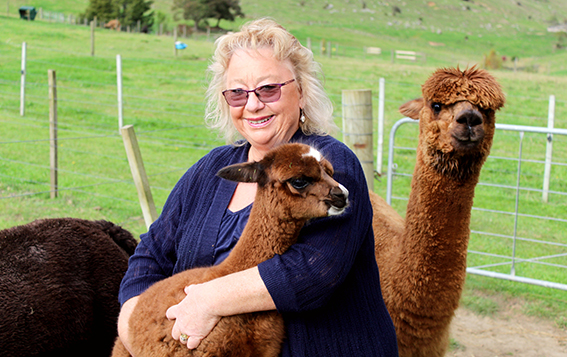 Lyn Skilling has owned QTAZ Alpacas since 2004 and has had a lot of success in the show ring. Photo: KELLEY TANTAU

The conversation about alpacas begins with their reproduction.
There’s an explanation about induced ovulation, a mention of a sound called “orgling”, and talk about the strange accuracy of when alpacas give birth – generally, between 11am-2pm.
Lyn Skilling, from QTAZ Alpacas in Hikutaia, knows all about the procreation of the species, and it’s a valuable piece of wisdom to have.
Award-winning alpacas are derived from good breeding.
“When we first started, we bought our females from New Zealand, but we had the opportunity to go halves on a male alpaca, and so we bought Seth [from Australia], and he really has been the foundation of our herd,” Lyn says.
Alpacas are judged on their conformation and fleece, and the ones that do well in shows are sought after in Europe, she says, and QTAZ has had a number of alpacas head overseas.
Last year, they sold two to Germany; the year before that, three to Belgium.
The alpacas travel across in “five-star” conditions and are used to increase the quality of breeding at their new farms.
Lyn and her husband Alan have owned QTAZ since 2004 and the name came about after Alan searched for alpacas online and found one that was “cute as”.
“We didn’t even know what they were,” Lyn says, “but we used to get this magazine called Alfresco, and there was an article in it about a lady who had been paralysed. She used to work with horses but now worked with llamas.
“I said to Alan: ‘A couple of llamas would be cute’, and when we went on any llama websites, there were these things called alpacas, and every farm we went to, we fell in love with some.”
They own about 60 of the huacaya species now, and breed fawns and browns. They’ve recently started to breed blacks, too.
Ten newborns have graced the Hikutaia farm in recent weeks, and Lyn says she and Alan first started naming their herd after song titles.
There’s Macho Man, Cinnamon Girl, Kiss Me All Over, Midnight Rendezvous, and Sweet Caroline – though there’s nothing sweet about her, Lyn says.
Midnight Rendezvous and Kiss Me All Over recently won big at the North Island Colourbration in Pukekohe. They were both named supreme champions in their fleece categories.
QTAZ also won the Bruce Johnston Memorial Trophy for most succesful brown breeder at the same show.
“I don’t really like being on show, and yet I love showing them… and I’d be lying if I didn’t say I love winning,” Lyn says with a laugh.
“We have been successful in the show ring and we are proud of it.”
Lyn and Kiss You All Over are planning to be at a national show in Fielding in September, and Lyn welcomes anyone to call in to their farm for a visit.
To keep up with QTAZ, and for more information, find them on Facebook. By KELLEY TANTAU