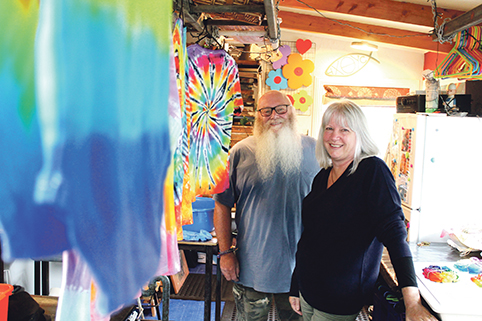 David and Mary Watkin will donate money to the NZ Cancer Society for every t-shirt they sell.

They didn’t intend to “take over the world” with tie-dye, but the Ngatea duo behind Sticky Lizzid Tees are doing their bit to brighten the lives of people with cancer.
David and Mary Watkin created the kaleidoscopic business back in 2012. Initially interested in screen printing, they changed tack and began tie-dyeing t-shirts, which went on sale at The Gallery Ngatea.
An online store followed, and eventually the pair designed shirts for a local touch team, as well as 150 travel tees for a Cook Island sports squad.
Now, they are using their colourful clothing to raise money for the NZ Cancer Society, while also donating some tie-dye bandanas to Waikato Hospital’s oncology ward, where their eldest son is undergoing treatment.
The inspiration behind the business name, David and Mary’s son Josh, 29, was diagnosed with cancer last year. He was operated on and despite all looking good, on his birthday in March, he was informed the cancer had returned. He and partner Claire are expecting their first baby in September.
“He had very long, beautiful, red hair, and for him to lose his hair, it was a big deal,” Mary said. “And going to the ward, we saw all the people there and we thought: ‘There must be a way to brighten their day up somehow’,” David added.
The couple will give $5 from every Sticky Lizzid bandana sold to the Cancer Society, and with every bandana sold, they will make another to be passed on to an oncology patient.
“When Josh was a tiny fella, there was always an awful lot of those little skinks around, and he’d lift up rocks and be really careful with them, and one day [a skink] ran across his hand, and he said: ‘Sticky lizard, mum’,” David said.
Lizards’ uniqueness and their ability to change colour also inspired the business – which operates by a “fingerprints in cotton” ethos.
“Every [item] is different,” David said. “We try and not have anything that’s the same and with tie-dye, it’s always a toss-up with what’s going to happen anyway.”
The pair enjoy experimenting with colours and patterns, but admit there’s a “box of doozies” hidden somewhere in the house. The business has become a hit at celtic fairs and goes into hyperdrive ahead of summer, and David and Mary juggle it all between their jobs as teacher aides.
“There was no real thought about taking over the world, we just love the tie-dye, it’s an uplifting thing,” David said. “When people put it on, it’s colourful and joyful, and it makes them happy.”
To purchase or donate: www.stickylizzidtees.com.