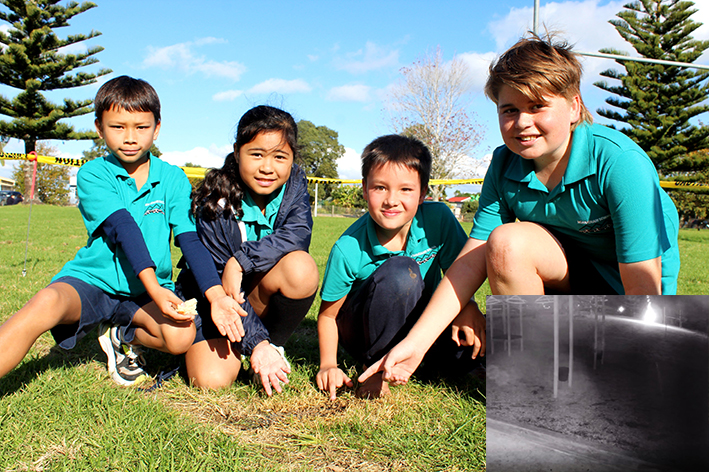 At 9:19pm on a Friday night, something mysterious happened at Moanataiari School.
Footage captured on surveillance cameras showed an object falling from the sky, ablaze.
It crash-landed on the school’s field and burned for roughly one minute.
Witnesses reported hearing a “whipping” noise, followed by a loud bang.
“It sounded like a car crash. I ran out back and there was a really bright glow coming from the school field,” nearby resident Rita Moore told The Profile.
By daybreak on Monday, there was another development.
A thin chain, with a small hoop at one end, sat between a charred strip of grass.
Teachers began investigating. Rumours started to swirl.
Was this the work of Men in Black or extraterrestrials? Was it the remnants of a Chinese rocket or space junk?
Only one thing was certain: the blackened strip of school field had piqued the interest of staff and pupils, and they were determined to get to the bottom of it.
“There’s no health and safety action plan to cater to something like this,” Moanataiari principal David Brock said. “And we’ll probably never see anything like it again in the rest of our lives.”
University of Otago masters student Daniel Burgin, who specialises in martian meteorites, told The Profile there were “strange” elements to the object that seemingly fell from the sky.
On one hand, it was unlikely the thin material of the metal chain could have survived the re-entry into earth’s atmosphere if it came from outer space. On the other hand, it was “a rare feat” for something to get so hot to burn the way it did.
“If it was the atmosphere that heated it up that much, it would’ve had to have come from space, because stuff that is orbiting around the earth is going tens of thousands of kilometres per hour,” he said.
“Say if someone dropped something out of a plane, you wouldn’t get anything like that; it would just fall.”
Mr Burgin said NASA tracked around 500,000 pieces of space junk orbiting the earth that were larger than the size of a marble.
However, there were millions of other smaller pieces orbiting at different heights and directions.
“We’ve been putting stuff up there since the 60s, so there is a fair bit, but for it to fall back down to earth is pretty rare.”
The school has done its own research into the mysterious crash-landing, with some pupils taking compasses out onto the field to determine the object’s trajectory.
Wayne Howes’ Room 9 students have also drawn pictures and written news reports about the enigma, with some children now having aspirations to become astronauts.
The school will be sending a fragment of the remains to the university, where Mr Burgin will analyse it using a scanning electron microscope.
He said the school could rule out the debris coming from the Chinese rocket that was launched on April 29. The entirety of it burned up and landed somewhere in the Indian Ocean, he said.
Despite this, it was “worth it” for the school to seek further explanation.
“The odds of ever seeing something fall from space is so incredibly tiny, so it’d be bloody awesome if it was [from there],” he said.
“And I would highly recommend anyone wanting to go into space to follow their dreams.” By KELLEY TANTAU