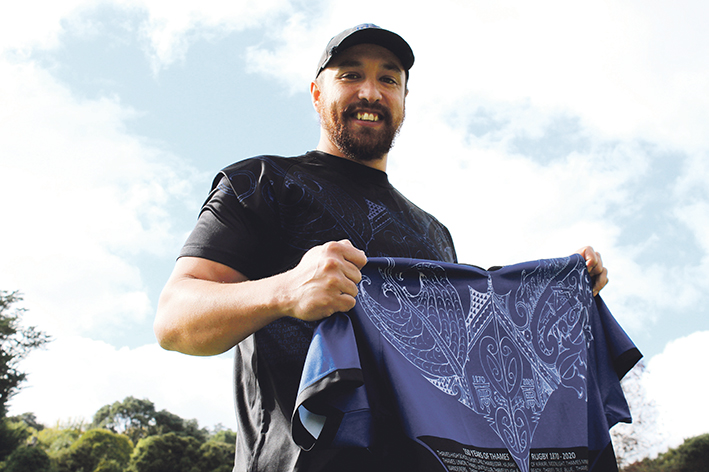 ‘The flying winger’ has taken his skills from the rugby field to the drawing board for Thames Rugby’s 150 year celebration.
Anthony Murray, a former player who was part of a Thames Rugby and Sports Club championship team, has designed the club’s limited edition players jersey for the August 13-15 celebrations.
The shirts will be worn during the Thames vs Barbarians game on August 14.
Mr Murray, 35, said the shirts took around four months to design, and depicted the town’s rich heritage. The addition of a stingray symbolised growth and strength, he said, while three rivers represented the Waihōu, Piako, and Kauaeranga.
The jersey also featured the names of the 39 Thames rugby clubs the town has had over 150 years.
Mr Murray said it was a “privilege” to design the shirts.
“I only had a short window of rugby, but I made sure I did my best when I was on the battlefield.
“It was an honour to have been asked to lift up the milestones and achievements of 150 years of Thames rugby. I love the game,” he said.
The first recorded game of rugby in Thames was played in 1870 between a local team and a team from Auckland. It ended in a scoreless draw.
In these early games, the rules were certainly different, with one of the aims being to kick the ball through the posts, not over a bar but beneath a tape stretched between them.
In 1893, blue and black were registered as Thames colours.
Mr Murray started playing rugby for Thames as a winger at age 21. He was known as ‘the flying winger’ before his last game in 2015.
Now, his limited edition jerseys will be up for grabs at auctions over the celebration weekend, for which tickets were on sale now.
The programme of events includes a couch chat and catch up function on August 13; a Thames Invitational vs NZ Barbarians selection rugby match on August 14; and a 150-year celebration dinner featuring rugby legends and celebrity guests. More info: www.trsc.co.nz/150years or email: 150yearsofthamesrugby@gmail.com.