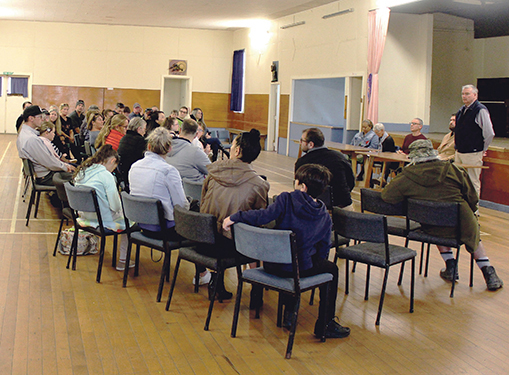 The public meeting was well-attended and gave families a chance to voice their concerns to the Ministry of Education over new bus routes around the Hauraki Plains. Photo: KELLEY TANTAU

Backlash over school bus routes has raised the question of who would be responsible for children’s safety as they made their way to new pick-up points along “dangerous” high-ways.
At a public meeting held at the Kopuarahi Community Centre on April 27 to discuss the changes to eight Hauraki Plains College bus routes, which would see students walk kilometres to get to their new bus stops rather than be picked up close to home, parents looked to the ministry to alleviate their safety concerns.
“If you let our kids walk these roads, it’s not if they’ll get killed, it’s when they’ll get killed,” Lisa Wiggins said.
Her daughter would have to be left on the corner of Bush Rd and Piako Rd to wait for her new bus, or walk to Bugger Cafe along SH25 – where seven fatal crashes happened in the past five years.
Another woman said her grandchildren would have to walk 4.5km along Hauraki Rd to get to the nearest pick-up point. “And don’t say the parents can take them because the parents are busy; they are working people,” she said.
To that, the ministry’s group manager for school transport James Meffan gave an admittedly “unpopular answer”.
“We run a service where it is absolutely paramount that we ensure the safety of kids. So, while eligible kids, that we designed the service for, are on our buses, we take full responsibility.
“We do not make any judgment about the safety of roads or the safety of walking beside them,” he said.
“Now, you can tell me that parents are too busy, but no parent is too busy. “If they identify a risk to their children, is a parent really going to say that it’s the minis-try’s fault? When it’s not within our remit, the safety of a child is the responsibility of the parent.” The meeting, chaired by Coromandel MP Scott Simpson and attended by Hauraki May-or Toby Adams, was called after affected families were told in April about changes to school bus routes in Term 2.
Hauraki Plains College principal Ngaire Harris put her “hand up” and apologised for the shortcomings in communication. The school was in-formed of the changes back in December.
“I do understand, as a kid who went on a school bus from Turua, that we’re used to things how they are, and it’s really difficult when things change,” she said.
“I hope that you would think that as principal, I’m here for kids, and that’s always been my stance, so I’ll do whatever I can to help with this situation.”
According to the ministry’s school transport eligibility criteria, to get school transport assistance, students must live at least 4.8km from the school; the school must be the closest state or state-integrated school where the student can enrol; and there must be no “suitable” public transport options.
Mr Meffan said this policy was not changing, but staff were instead working to bring things back within the policy.
“We have a group of people whose job it is to go out and take stock of the local area to understand how many eligible students we have, and to make sure our routes are de-signed and are fit-for-purpose to carry those eligible students to schools. We have a range of kids in a range of situations, and my mission is to make sure that those who need it most get the most urgent attention.
“So, in some respects, I am unapologetic when I say if there are routes we’ve put on for kids who are not eligible for our assistance, I’ll be looking to correct that so we can spend the money where it is most need-ed.”
Scott Simpson later told The Profile the meeting resulted in a “temporary reprieve”, with the ministry delaying implementation of some bus route changes until Term 3.
“However, this will be of little comfort to parents concerned about finding a long-term solution,” he said.

Kiwis back ‘in the ‘burbs’