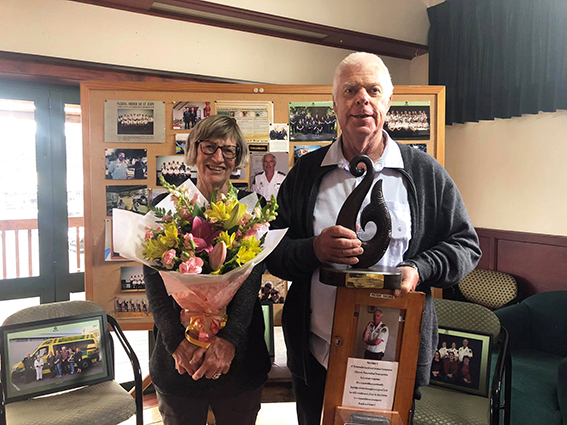 Peter Young, pictured with his wife Lesley, was celebrated at a farewell last month. Photo: SUPPLIED

When Peter Young watches the Paeroa ambulance depart from its station with its siren blaring, he often wonders where it might be heading.
But then he thinks: “Been there, done that.”
The 69-year-old has recently retired from the frontline after working for Paeroa St John for 34 years.
During that time he dealt with reckless Christmas injuries and medical emergencies, and was a calming influence for patients as they rode in the back of the ambulance to Thames or Waikato hospitals.
“You might be thinking ‘holy sh*t’ inside, but you’ve got to be acting calmly as though there’s nothing too much wrong with them,” he told The Profile.
“You can only do what you can.”
A mechanic by trade, Mr Young was involved in the industrial fire brigade at Te Rapa, Hamilton, and upon moving to the Paeroa, he intended to join the local brigade there.
“But because I’m colour-blind, in those days they didn’t accept you. Then Selwyn Wood asked me if I’d drive for [St John], and he talked me into it and that’s how it all started.”
Mr Young went on to complete his paramedic qualification in 1999 and became the first paid officer in Paeroa in 2002.

One of the jobs that stuck out to him was helping a man who was eventually diagnosed with an aortic aneurysm.
“When I went to the guy in Paeroa, he looked really sick, and I was only going to go to Thames [hospital], but as I was coming out the gate, [I decided] we’re going to Waikato.
“I gave him a little bit of fluid, a bit of pain relief, and called the hospital early so they were prepared when we got there. That had a really good outcome, that job… it would’ve been a job that saved his life.”
And whenever they arrived at the hospital, Mr Young said there was always a “thank you” waiting.
“A lot of people wrote in and thanked the ambulance staff… they appreciated what we were doing,” he said, “and talking to the people in the back of the ambulance, we had some really interesting discussions with them.
“Sometimes you might have been in the back of the ambulance with a patient for an hour or more, and it was really quite nice being able to see what you’d done and how they got better.”
Mr Young’s commitment to Paeroa’s St John ambulance was acknowledged on April 18. He is still involved in St John as a peer supporter, and is the chairman of the Paeroa area committee.