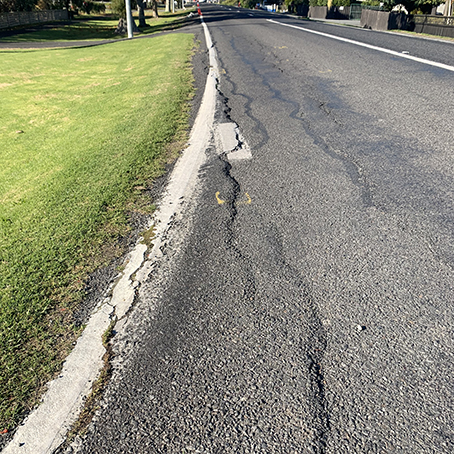 A road in rural Hauraki which has felt the weight of heavy vehicles and a summer drought leading to “cracking, slumping, and rutting”, could cost around $260,000 to repair.
Around 1.3km of Pipiroa Rd in the urban area towards Ngatea was in “a particularly bad state of distress”, Hauraki District Council group manager service delivery Adrian de Laborde said.
The culprit was last year’s drought, when low rainfall combined with above-average temperatures, he said.
This has been exacerbated by increased traffic volumes, particularly when there has been a high proportion of heavy vehicles using this road as a detour during Ngatea’s main street upgrade. However, increased traffic wasn’t the primary cause of the pavement distress, he said.
“Pipiroa Rd was one of the many roads affected across the Hauraki Plains due to the drought. We are also investigating the impact of large roadside trees on the surrounding soils’ moisture content and ground movement on this section of road,” Mr de Laborde said.
Council planned to fix the urban section of Pipiroa Rd prior to winter this year; however, it was deemed prudent to wait until the Ngatea main street works were finished before starting repairs.
Council hoped to have the road repairs underway in the next construction season “at the latest”, starting in October.
“Waka Kotahi (NZTA) have always shown a willingness to contribute to repair costs where increased traffic has triggered the road failures. However, in this case, the pre-existing pavement failures on Pipiroa Rd have complicated the identification of pavement distress associated with the increased traffic volumes during the Ngatea Main St upgrade,” Mr de Laborde said.
NZTA will be contributing to the repairs though, as it had already approved some of the cost of fixing road damage caused by drought.
“Waka Kotahi already contribute significantly to all road works in our district through subsidies, and has recently approved $2.8m worth of drought repairs across the district, including $100,000 for the 1.3km urban section of Pipiroa Rd.”
Mr de Laborde said there were several road repair options being considered, based on available budgets, such as doing repair patches or rebuilding the entire road section.
“In early 2020 we established that fully rebuilding the urban section of Pipiroa Rd would cost approximately $260,000.
“Whichever option we go with, we need to balance costs with the long term integrity of the road, as well as what impact it will have on the budget for other programmed road repair sites throughout the district.”
Temporary speed limits along this stretch had been put in place because of the uneven surface, and council would be looking out for signs of further deterioration, he said.