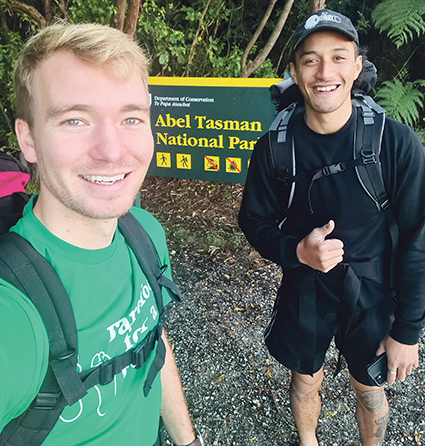 A pair of Paeroa men put their feet to the test when they braved two of the country’s Great Walks – barefoot.
Vini Williams and Jack Keeys walked more than 100km in just five days, raising money for the purchase of shoes for children from low socio-economic backgrounds in both New Zealand and Africa.
Jack told The Profile the first day of their trek across the Abel Tasman was “perhaps over-ambitious”.
“Almost 40km with full packs on day one was extremely tough and pushed us to breaking point.
“The ground was much tougher than we expected, and being on our feet for 12 hours was tough on the legs,” he said.
On the second day, they walked another 20km before embarking on a water taxi ride, a rental car drive, and a flight to Auckland airport.
Their second Great Walk, Lake Waikaremoana, in Hawke’s Bay, started with a 10km trek and a 600m elevation. The next day, the fourth day of their journey, they walked another 28km, while the final day took a turn for the worst when the men realised their “pick-up ride” wasn’t coming to get them.
“Vini was walking on a sliced foot, with open blisters on each of his feet and swollen ankles at this point, so I ran ahead to complete the track and hitchhiked 50km to our car.
“I had to walk an extra 7km to get picked up on a deserted gravel road in the middle of nowhere, but eventually a friendly local came past and dropped me off,” Jack said.
“It was on track to be 100km in 100 hours, but ended up being 113km in 101 hours.”
First aid kits the pair took on their journey were well-used, he said, with needles for bursting fluid pouches in swollen feet, bandages and plasters for cuts, tweezers for splinters, and lots of antiseptic.
“For the last three hours of day one, we walked in almost complete silence, and collapsed in the middle of the track more than once,” Jack said.
“It’s difficult to articulate how challenging that day was, hobbling on exhausted muscles, raw feet, and in the cold and dark with heavy packs and still more to go.
“But what kept us going, was that we knew there were so many young Kiwis who could be both inspired and impacted by us finishing and raising the money, and we knew that long-term impact was worth our short-term pain.”
The men have raised around $10,500 for their efforts, and Jack said he would be planning his next “Charity Challenge” in the second half of the year. To keep up to date, find him on Instagram. By KELLEY TANTAU