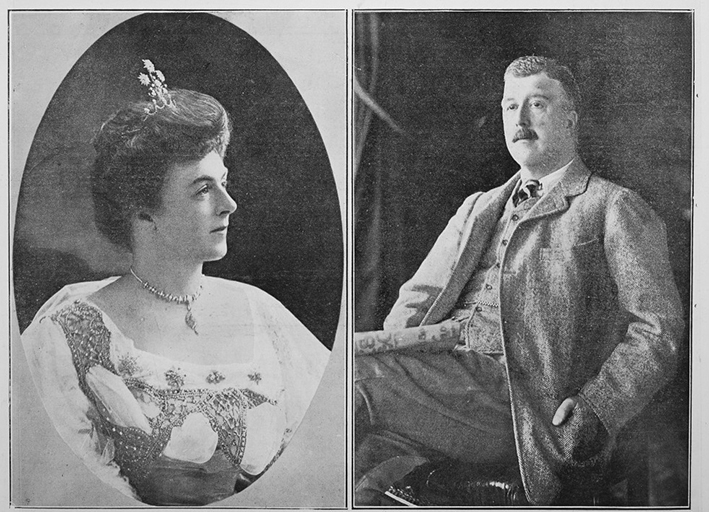 Lord and Lady Liverpool made a visit to Tapu. Photo: SUPPLIED

1919
Tapu celebrated one of the most unique events in its history when their Excellencies Lord and Lady Liverpool made a visit. The Vice Regal party were motored along the coast and under an arch which had been placed over the road near the school.
So well did the arch look that His Excellency made special remarks concerning it. The party, which included many noted Thames people, arrived around 11.30am. In all there were about 15 cars and it was quite a sight to see them approaching along the stretch of flat where school children and residents waited.
Unfortunately the weather was not the best. Mr Twist, school master, welcomed them as being the first governors of New Zealand to visit Tapu.
His Excellency noted the fact that he was the harbinger of rain so badly wanted throughout the Province. The Vice Regal party stayed about half an hour before departing.
Roads radiated from Ngatea to every district on the Hauraki Plains as the town developed into the commercial centre of the area.
There were nine business sites situated 100 yards from the new cantilevered bridge and Piako River Wharf. Opposite were the Town Hall, Post Office, Money Order Office and Telegraph Office. There were two general stores, two stock sale yards and a blacksmith.
A private hotel was being built and a site had been purchased for a dried milk condensory. Ngatea could be reached by motor car from Paeroa or Thames all year round, and from outside districts for the greater part of the year. Ngatea also had a daily river service providing for passengers, mail and stores from Thames (12 miles and occupying 1.5 hours). There were also special river launches and a direct bi-weekly service to and from Auckland.
There was a great exodus from houses at Paeroa when a severe earthquake shook the area. The disturbance lasted nearly a minute and seemed to come from an easterly direction. Hanging lamps and other suspended objects swung backwards and forwards fully three minutes after the shock ceased. A number of people who had never felt an earth tremor before were quite bewildered.
One businessman standing close to his window, could not make out why the wall kept hitting him on the back and people leaning against telegraph poles or side walls were in the same quandary.
A second shock of less violent and much shorter duration was felt a few minutes afterwards, a third about midnight, a fourth at 4am the next day and a fifth half an hour afterwards. No damage was reported.
The road from Paeroa to Thames came in for a good deal of attention at a County Council meeting. Evidently people from Waikato to Coromandel were laughing at it.
One councillor said “Our roads are getting in a disgraceful state. It will soon be like driving along a creek bed.”
The chairman said “I favour something permanent. Strips of concrete for wheels to run on can be put down for about £400 a mile. This course is being adopted in parts of America.”
A councillor agreed, adding “We should have a concrete road, with metal road for horse traffic. Horses on concrete roads need rubber shoes.”