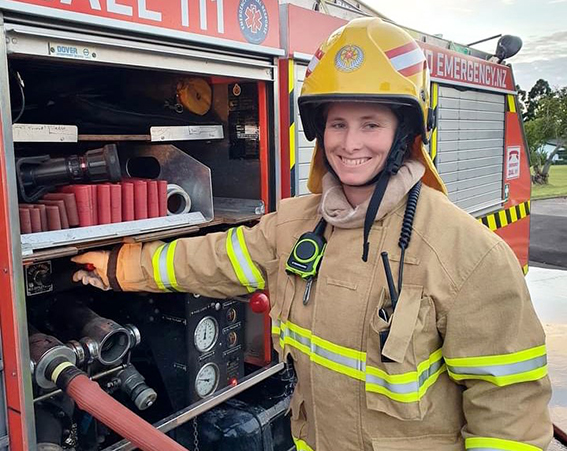 Roseanne Hitchman will take part in the challenge just three months after having her first child. Photo: SUPPLIED

A Thames Valley woman will climb more than 1000 stairs for the Firefighter Sky Tower Challenge this weekend – just three months after having her first child.
Roseanne Hitchman will ascend the 51 flights of stairs of the 382m-tall Auckland Sky Tower alongside seven other Ngatea Fire Brigade members on May 22. The annual event is a fundraiser for Leukaemia and Blood Cancer New Zealand, and was called off last year due to Covid-19.
Since then, Roseanne, 33, transferred to the Puriri Fire Brigade and has had her first child, a son named Braxton.
“It meant I couldn’t start training again until after I had the baby, which was in January, so I’ve had a short period of time to train for it,” she said.
Roseanne has been climbing the 135 steps of Jacob’s Ladder, in Thames, and has also been running the hills around her rural home, with baby Braxton in the front pack. His extra weight was a training benefit because the firefighters were required to wear up to 25kg of kit for the challenge, she said.
“The gear is heavy anyway, but when you’re on the job, you’re not lugging it up over 1000 stairs,” she said. “When I first started going up Jacob’s Ladder after having Braxton, I could barely walk the next day… and when you go up the Sky Tower, there’s no windows or anything to look at, so it’s just you going around and around until you get to the top.”
The Firefighter Sky Tower Stair Challenge was developed by firefighter Tony Scott in 2005 as a fundraiser for Leukaemia & Blood Cancer New Zealand. In 2016, he was awarded a Queen’s Service Medal for services to the New Zealand Fire Service and the community.
Roseanne has participated in the challenge five times, but not in the past three years. She got involved because her brother-in-law was taking part.
This year, Roseanne’s sister Rachel Ross, from the Ngatea brigade, will make the climb alongside her with fellow Ngatea Brigade members Dylan Adams, Maia Rangihika, Jade Cochrane and Quesera Matete. Roseanne joined the Ngatea brigade at age 16 following in her father Ian Hitchman’s footsteps, who has been a Ngatea member for 27 years. She completed 16 years of service in Ngatea before recently moving to Puriri. Being a part of Fire and Emergency NZ was her way of giving back to the community, she said.
When she makes the gruelling climb on May 22, her driving force will not only be the charity behind it, but baby Braxton, as well. “Get to the stop and see him, that’s what I’ll be thinking.”
To help Roseanne in her fundraising efforts, visit firefighterschallenge.org.nz/roseanne-hitchman. By KELLEY TANTAU