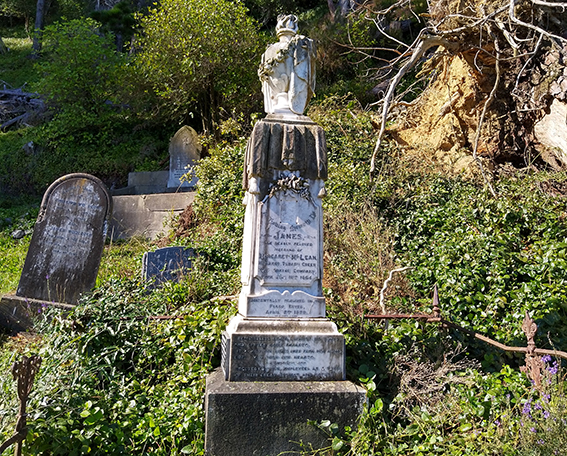 A few days’ duck shooting on the Piako River was a welcome break for James McLean, a 34-year-old mine manager of the Tararu Creek Gold Mining Company. In early April, 1899, he was one of a group who left Tararu by yacht for Kerepēhi, where they set up camp.
The next morning, they broke up into small parties and James, George Tetley and Naki Eahu, accompanied by a dog, set off up the creek in a small canoe. When a mile and a half from the Māori settlement, the dog began to fidget and stood up with its forefeet on the edge of the boat. This tilted the frail craft to one side; it filled with water and overturned throwing the occupants out.
James McLean, who was not a very good swimmer, swam a few yards when Naki called to him to return to the capsized canoe, which he attempted to do but failed then sank. Naki got hold of James who clutched at him but the strong tide separated them. James grabbed at Naki a second time and they both sank together. Naki managed to surface and with great difficulty reached the bank, having swallowed water and being quite exhausted.
James rose a second time but only his hand was visible before he sank again. He was fully dressed and, weighed down by ammunition and his gun, was no match for the very strong current of the tidal river. George Tetley, who was unable to swim, had drifted down the creek with the canoe and using his gun as a paddle, made it ashore.
A woman named Ngatira along with several others began searching for James. They would be in the water continuously for four and a half hours.
The terrible news was brought into Thames and at about 8.45pm, a boat full of men and Constable Stevens left for the scene with grappling gear to drag for the body. After a run across the Piako, a hard pull of 15 miles brought them to the accident site. It was about 2.15am and the trip had been a very unpleasant one. Rain began to fall and there was no shelter except for a tent.
They huddled around a fire as they could do nothing until daylight. Local Māori assembled on the river bank and at about 4am, the search parties breakfasted on ducks and kumara. At daybreak they divided into two sections, one proceeding up and the other down the river.
The river was thoroughly dragged. When the grappling irons touched anything on the river bed Māori men and women dived to see what it was. The current was so strong they had to drive a manuka pole into the mud down which they scrambled. The river was full of snags, and dynamite was sent for in the hope an explosion would bring the body to the surface.
The tug Comet arrived with another search party. Shortly after 3pm James’ body was found and enclosed with nets to prevent it from drifting. A great gloom fell over Thames and operations at the Tararu Creek Gold Mine were suspended. James McLean was a modest man but held in the highest regard by his employees and friends. He was a mine manager of undoubted ability – a young man who had advanced by sheer hard work and perseverance. The accident had cut short a most promising career.
James was buried at Tararu cemetery, his funeral attended by all sections of the community and all of his employees. James left a wife, Margaret, and seven children.
The help of local Māori in searching for James was highly praised. Both young and old remained with the searchers until the body was found.
A month later relatives and friends of James McLean were welcomed at their Kerepēhi settlement in his memory.