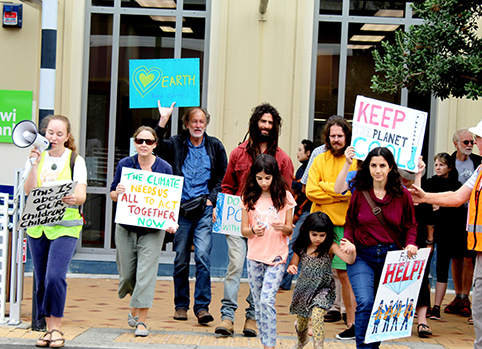 Two failed motions, an allegation of conflict of interest, and a reminder of a $100,000 High Court case plagued district councillors as they met to discuss their decision not to sign a climate change declaration and the subsequent “consequences” that followed.
The Thames-Coromandel District Council (TCDC) meeting on April 4 was a demonstration of diverse opinions as councillors debated for 40 minutes before deciding the best course of action to take in signing – or not signing – the declaration.
Now the public can have its say on whether the decision made was the right one.
In April, 2019, council decided not to approve of Mayor Sandra Goudie signing the Local Government Leaders’ Climate Change Declaration.
Hauraki Coromandel Climate Action challenged this decision, and following a hearing in the High Court in August last year, the judge quashed council’s decision and directed it to reconsider.
The April 4 meeting began with South East ward councillors Gary Gotlieb and Terry Walker alleging Mayor Goudie was “biased” in the climate discussions, urging her to consider stepping aside from chairing the meeting.
“If you are saying you should be chairing this, I am gobsmacked,” Cr Gotlieb said.
“It does look biased to me,” Cr Walker added.
After obtaining support from Coromandel-Colville councillor John Morrissey, Mercury Bay councillor Tony Fox, and Thames councillor Sally Christie, the meeting pressed on with Mayor Goudie at the helm.
Five options were presented to council, including council approving or disapproving the mayor signing the declaration, as well as an option which made it “very clear” it did not mean council was adopting the declaration as “a statement or binding instrument”.
The fifth option, which was added by Thames councillor Martin Rodley, stated that council agreed with the guiding principles and action in the declaration and approved the mayor signing it. Council would also continue with its current climate change commitments.
Councillors voted 6-3 to make this option their preferred choice, but not before two other options were put forward and quickly turned down.
Mayor Sandra and councillors Tony Fox and Murray McLean were the minority who voted against Cr Rodley’s motion.
“If we sign up to this, then we are committing this council to unknown financial liability, I believe that,” Cr McLean said.
“I accept the climate change argument, and I accept that people are passionate about climate change, but we cannot say we’re signing up to the unknown. I, as a councillor, can’t do that.”
However, councillors Rodley, Walker, and Sinclair alluded to the High Court case, stating that the only time the declaration had been in the High Court was with TCDC.
“Just sign this thing and move on,” Cr Walker said.
“This has cost us $100,000 already and we’re going nowhere.”
All five options presented to council will go out for public consultation, subject to approval, however, the Mayor is not obligated to sign the declaration following the consultation.