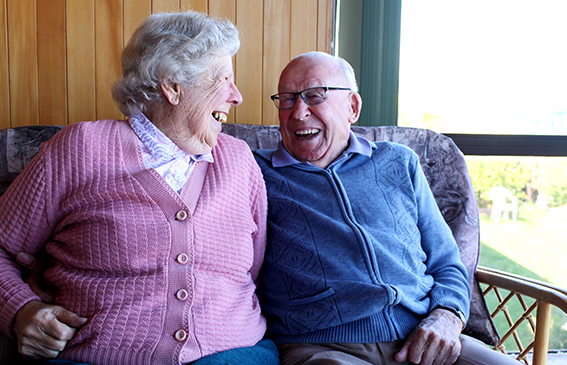 It’s easy to see Audrey and Bill Graham have lived a life filled with laughter.
In a photo taken of the two of them, there’s a snake wrapped around Audrey’s neck and a camera clasped in Bill’s hand.
They’re both smiling, a gleeful, open-mouthed kind of smile, and when they reflected on their 65 years of marriage last month, humour and happiness seemed to be a recurring theme.
“He was a bit nutty, and I liked that,” Audrey recalled.
“I was brought up in a Christian family and I told him once that I’d never been to a horror movie. He said, ‘I’ll take you to one’.
“When he had seen it, it was scary because it was in black and white, but when we went, it was in technicolour, so we ended up laughing the whole way through.”
The pair met in Bible class when Audrey was 18 and Bill was 28. They tied the knot one year later on April 28, 1956.
Even the wedding had its own dose of comedy.
“Audrey decided she didn’t want a wedding march when we walked into church, and there was a mix-up, and they thought she meant she didn’t want any music,” Bill said.
“We walked up to dead silence!” Audrey added, and the two of them chuckled.
Now 84 and 94, respectively, Audrey and Bill have lived in Katikati and Whangamatā, and now reside in Thames. They had three kids, six grandkids and three great-grandchildren.
Audrey said she was not the “adventurous” one of the pair, though the photo with the snake begged to differ – as did the drawing a friend drew of her riding on a motorbike.
Before she married Bill, she bought a BSA Bantam motorcycle and learned to ride on unsealed metal roads. Some years later though, Bill commented that he could “walk faster than I rode”, she said.
Bill was the adventurous one. Well into retirement, he went bungee jumping with son Peter, as well as bike riding on trips Peter led, including one from Christchurch to Queenstown, and another from Hamilton to Whangamatā. Together, Bill and Audrey also went parasailing in 2018. But among the highs there was also a low, when their Whangamatā farmhouse went up in flames three years after moving there.
“I took the message from a friend of mine, and she said the house was on fire. I practically laughed at her because I’d only just left the house,” Audrey said.
“I was up the back of the farm and I had to tear home on the tractor, but by the time I got there, the whole thing… you couldn’t get near it,” Bill added.
“I thought Audrey and [daughter] Lyn were still inside so I was panicking. It was quite [a relief] when they turned up.”
Audrey admitted they weren’t “perfect”, but after 65 years, Bill could still “anchor” her.
“I forget what I told mum when I got married to you,” she said, looking over to him.
“But it was just that you keep my feet on the ground.”