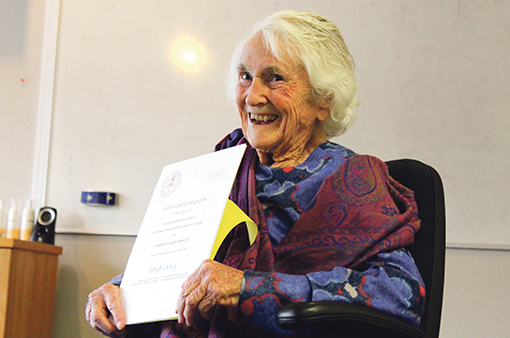 Gwenyth Wright’s outlook on life, her polite authority, and her “what can be done?” mentality was acknowledged at a Queen’s Service Medal presentation last week.
Held in the Thames-Coromandel District Council chambers on April 27, the ceremony had been delayed due to the Covid-19 pandemic last year.
At the time, Mrs Wright had been acknowledged in the Queen’s Birthday honour’s list for her services to women and the community.
At the presentation, friends, family, and loved ones spoke of the inspiration and passion instilled in them by Mrs Wright, 94, who helped establish the Wellington and Thames Women’s Loan Funds.

Mrs Wright also founded the Organic Strategies Group, and worked with the district council to arrange land availability to launch natural burials in Hikutaia in 2017. She was selected for a New Zealander of the Year, Local Heroes award in 2019, and the eponymous ‘Gwenyth Wright Study Grant’ was available for its third year in 2021.
Kim Wallace spoke of her step-mother’s practicality and intelligence.
“My dad [Colin Broadley] has some outrageous ideas, and some are pretty far-flung and they could easily lose contact with the ground,” she said, “and when Gwenyth came into his life, she didn’t hamper anything, she just tethered it to the ground a little bit.
“Her practicality, her intelligence, and her concept of how things can fit into the world is how she’s seen so many of these problems that need fixing… and says: ‘So what shall we do about it?’
“That’s how she’s kept my dad tethered to the ground, but it’s also how she’s got so many things done, and we’re all really privileged to have been a tiny part of that.”
Mrs Wright was presented with the Queen’s Service Medal, as well as a Community Service Medal, by Mayor Sandra Goudie.
Meanwhile, Rowan Garrett of Kerepēhi, received his QSM from the Governor-General, Dame Patsy Reddy, in Government House, Auckland, on April 20.
Mr Garrett, who has been a member of the Kerepēhi Brass Band for more than 70 years, was awarded his medal for services to brass bands in the 2021 New Year Honours.
He joined the band in 1946 as a 10-year-old, after being invited by his piano teacher and band founder, Mr Vivian.
He has since served as the band master, chairman, president, vice president and committee member, and has been the band’s librarian for many years.
For his decades of service, Mr Garrett was awarded the Hauraki District Citizens Award in 2004, was made a life member of the Kerepēhi Brass Band in 1979.
In January, Mr Garrett told the Profile it was “a bit of a shock” to receive the award.
He enjoyed being part of the band, he said.
“It’s the comradeship. For a country band, we’re not doing too bad.”
During the ceremony, Dame Patsy pointed out her father was also a foundation member of the Kerepēhi Brass Band. By KELLEY TANTAU