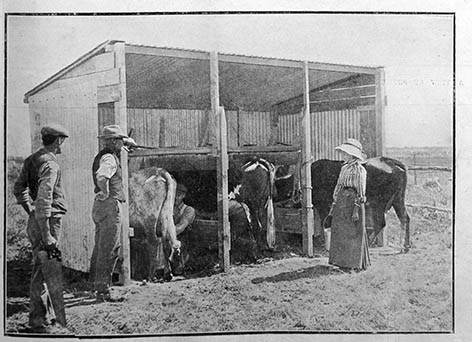 Dairy farming at Pipiroa in the 1920s. Photo: SUPPLIED

The sight of Edward Arthur’s unmilked cows at Pipiroa disturbed George Goldthorpe.
It was a late February afternoon in 1923 when George stopped by the farm. He looked about and called but got no reply. He had seen Edward around noon that day when Edward mentioned in passing that his wife and young baby were staying with Mrs Arthur’s ill father at Waitakaruru. He had sent the other two children, aged 13 and 9, that morning to join their mother. George went home but at 8.20pm he returned and made a further search for Edward but he had vanished.
In the early hours of the next morning William Ganley, a farmer at Pipiroa, got up and looking out the window saw Edward’s house, about 100 yards away, on fire. He called his mate John Galvin and they ran over but found the building had been practically destroyed. The roof had fallen in and the flames were licking the skeleton of the building. They knew Mrs Arthur had gone to Waitakaruru but were not sure where the children were. As far as the fierce heat would permit they made a desperate search. The cowshed was also searched, but there was no trace of anyone.
John Kelly, the local storekeeper, arrived at the scene about 6am but by then the house had burned to the ground. John had seen Edward the previous afternoon when he came to his store about 4.45pm for tobacco and cigarettes. John searched the smouldering ruins and made the grim discovery of a body on the wire mattress of an iron bedstead lying on the ground where Edward’s bedroom had been. He threw water over some still flaring flames then left to inform the police. Constable Devereaux of Kerepēhi caught a launch that was just on the point of leaving and was soon on the spot.
It was thought Edward had used an open fireplace in the dining room to prepare his evening meal, and went to bed shortly afterwards, and that a cinder from the fire ignited the building. But at 2pm the constable found Edward’s coat hanging up in the milking shed and a letter in the inside pocket addressed to Mrs Arthur. In the presence of Mrs Arthur’s brother he opened the letter. It intimated clearly that Edward had intended to take his life that night.
Edward was from Kent, England, and had been in New Zealand about nine years. He had served with the Rifle Brigade in World War I during which he was wounded. Since returning from war, he had farmed on a small acreage at Pipiroa. The farm was likely a result of the Discharged Soldiers’ Settlement Act, which allowed returned servicemen to be granted farmland on generous terms and to apply for cheap finance to develop it. But much of the Hauraki Plains land was totally unfit for dairying. Drainage was incomplete and roads unmetalled and impassable in winter. By 1923 this was the sorry plight of the soldier settlers on the Hauraki Plains who had paid excessive prices for land which was undrainable and practically worthless. As well as economic difficulties, returned soldiers were often suffering from shell shock and struggling with the aftermath of war wounds, all ordeals which could merge into a tragically lethal combination.
Edward is buried at Shortland cemetery, Thames.