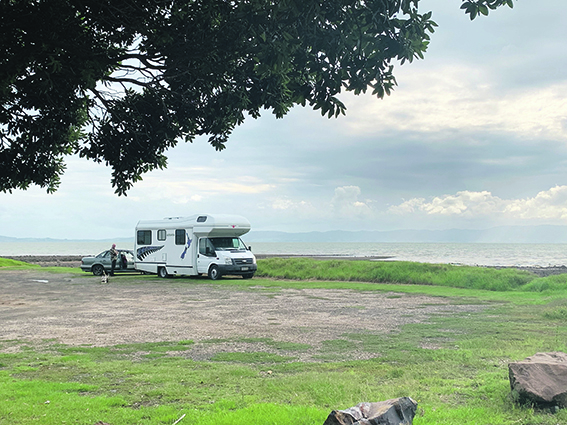 A Thames Coast campground operator has considered putting barbed wire around his boundary to stop freedom campers sneaking on to his property, a district council has heard.
A few kilometres south, a motelier told of losing guests due to campers obscuring the views of her paying visitors.
On April 13, more than 20 submitters spoke at Thames-Coromandel District Council’s hearing for its freedom camping bylaw.
Of them was Bruce Efford, the lessee of Tapu Camp, who told councillors that having three freedom camping areas within a “1.5km circle” of two campground operators was “a bit tough”.
“These freedom campers are sneaking into the camp to use our facilities, and the ones that are doing it for a living, book into the camp at a cheap rate for one night a week to get their power charged, their effluent dropped, fresh water, good hot showers and their washing done.
Then they go away for six days and hang around the outside of the camp.
“The others sneak in,” he said.
“There’s two ways I can deal with it: I can put barbed wire fences like they do around prisons, or else put security guards like they do in Buckingham Palace.”
Mr Efford said he had even dropped his price down to $10 a night per person, but still freedom campers were putting a pinch on business.
Meanwhile, Andrea McCartney from the Sunset Motel in Tararu, wrote in her submission to council that since 2015, regular, returning guests have given up on staying in Thames as a direct result of council allowing freedom camping on North Tararu reserve.
A letter from a guest attached to her submission said they were “very disappointed to have our usual magic view across the firth toward Auckland obscured by five motorhomes of varying sizes. I cannot understand why this is allowed by your council”, it read.
Council’s review of the freedom camping bylaw determined some sites required a change in designation to help better manage freedom camping in the district.
In Thames, it was proposed to increase the designated area of freedom camping at the Danby Field Carpark and, out of 89 submitters, 30 agreed with the increase, 22 disagreed, and 37 did not know.
Council also proposed to increase the designated area for freedom camping at the Rhodes Park Carpark, and out of 87 submitters, 31 agreed with the proposed increase, 20 disagreed, and 36 commented they did not know.
It was also proposed to change the name of the bylaw to ‘Responsible Freedom Camping Bylaw’. There were 98 submissions received: 61 in favour, 26 against, and 11 unsure.
Council will make its decisions on the proposed amendments at its deliberations on May 25.
Meanwhile, the Ministry of Business, Innovation & Employment is holding public meetings on April 28 to outline the government’s proposals to improve freedom camping.
The meetings will be held at TCDC council chambers in Thames at 10:30am and Mercury Bay Community Board Rooms at 4pm.