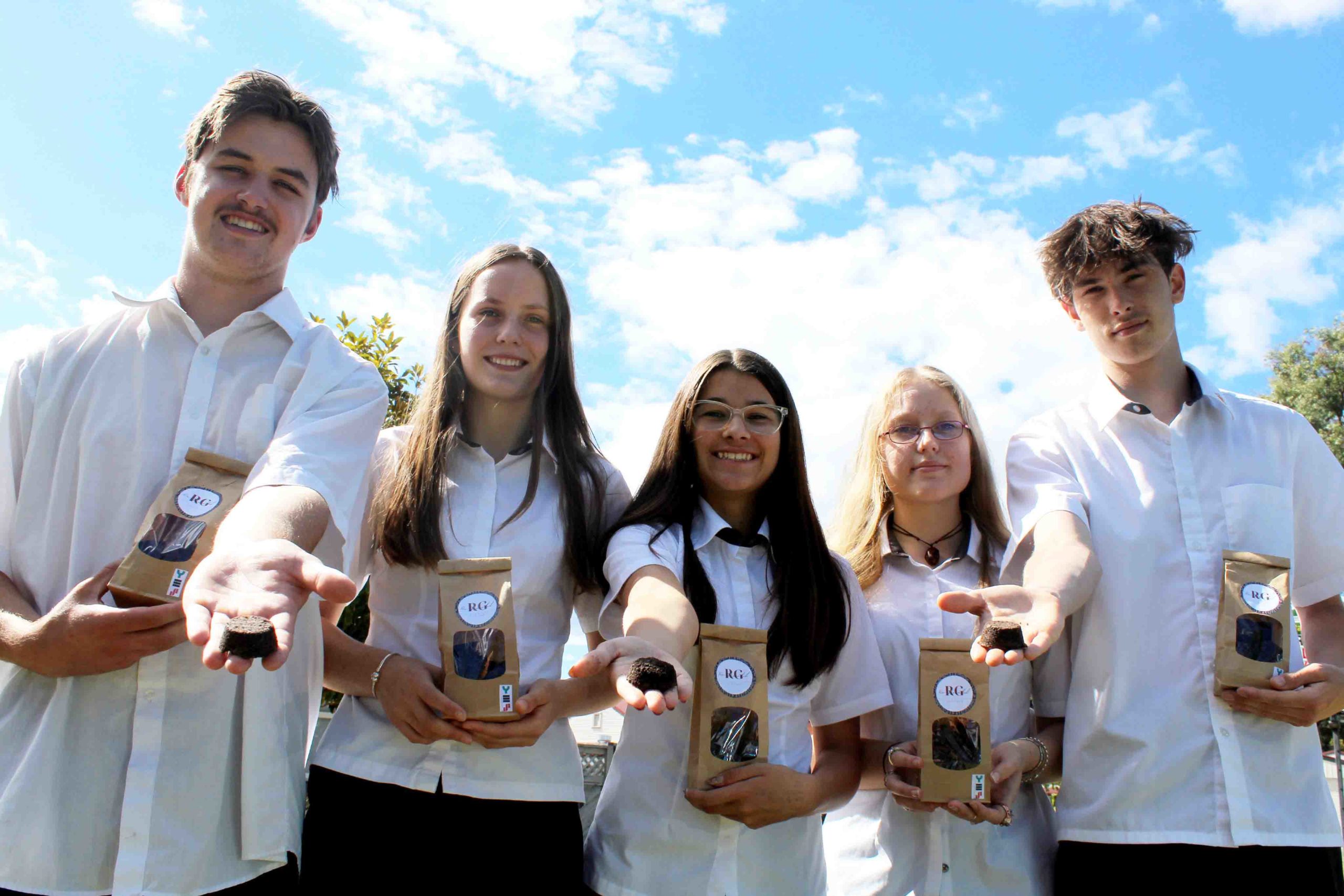 Coffee grounds once destined for the landfill are being utilised for a unique business venture thought up by college students.
Sarah Watson, Suzie Roskam, Naomi Smith, Case Baxter, and Jeramiah Coffey, Year 13’s from Paeroa College, have established Re-Grounded, a company that sells organic fire starters made from locally-sourced coffee grounds.
The business venture is part of the Young Enterprise Scheme, a programme in which students set up and run a real business, and at Paeroa College, the course is being guided by business teacher Sean Koller.
“Overseas, they make fire logs out of coffee grounds, and we did a bit of research and found they burned 20 per cent longer than wood does,” student Case Baxter told The Profile.
“Fire starters are made with harmful products, so our goal was to remove that – and, there were no other coffee ground fire starters on the New Zealand market, so we spotted that gap.”
Upon realising the majority of used coffee grounds got sent to landfill, the students approached Tanya Nelson, who runs The Coffee Container across the road from the college. She offered to not only supply the used grounds to the business, but to distribute the finished product as well.
“One of the goals of the Young Enterprise Scheme for Year 13s is sustainability,” Jeramiah said, “and this is very sustainability-focused. When we saw how coffee grounds are bagged up at the end of the day and taken to the dump, we thought we could use this as a chance to minimise waste.”
After obtaining the coffee, the students take the grounds home to dry them in the oven.
They tested drying the grounds in the barbecue, too, as well as naturally, but the oven proved to be the most-effective, they said. After adding a secret ingredient, the fire starters are pressed into moulds and placed into packaging, ready to sell.
“The first time we did it, we didn’t know if it was going to light, but it burned well over 16 minutes, which is longer than the average fire starter,” Case said.
The product has been constructed with advice and support from other local businesses, including a candle shop and a fireplace company, and the students said they were grateful for the help.
They have already sold their product at the Thames market, and said the timing was perfect – ahead of the cold winter season. They also have their eyes on creating coffee ground briquettes to replace the traditional coals used for cooking.
“Because being made out of coffee, and not being so harmful, means the smoke that comes out of the [coffee] ground doesn’t have much smell or any effect on the food you cook,” Jeremiah said.
The students hope to have a website up and running in the next few weeks, as well as see Re-Grounded fire starters in stock around the Thames Valley. To contact students or purchase the product, email: regrounded2021@gmail.com.