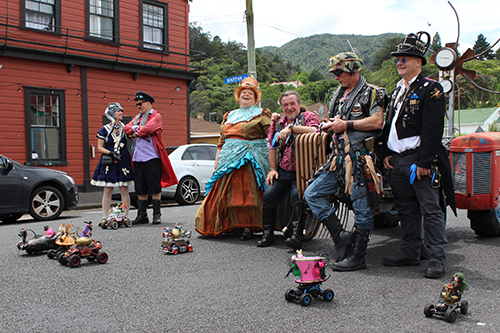 A report released to help the Thames Community Board better understand where its money goes has inspired members to shake-up the way funding has traditionally been forked out.
The community board requested a report on its grant allocations so it had a clear picture of its commitments, and at its March 31 meeting, it was determined the board’s local grants budget totalled $237,172 between 2018-2021.
“Thames promotion” made up $90,000 of the budget, while $60,000 was put aside for community grants.
The report also included the major events funding Thames received from the economic development team, which amounted to $181,107 between 2014-2020. According to the report, Steampunk has been a recipient of the major events fund five times, receiving more than $104,500 from council.
The Gold Rush Market obtained funding eight times to a total of $1739. The New Zealand Festival of MindSports received funding four times between 2014-2016, totalling $17,445. Last year, Wings and Wheels, the 4×4 Nationals, and buses for the Fat Freddy’s Drop tour to Thames made up $9440 of the major events fund.
“For me, it’s valuable to see where we’ve been and where we go now,” district councillor Sally Christie said. “This is a starting point, rather than an end, and how do we move on now in terms of reviewing the policy, deciding what’s important, who applies for what… I don’t want to muddle along for another year, because there’s quite a lot of money that goes out automatically.”
The community board also pays $34,931 in rates remissions for community, sporting and non-profit organisations, funded through the Local Works and Services rate.
The Thames SPCA had the lion’s share of this funding: $11,084 between July 2018 to June 2021.
Christie said another thing that caused “a lot of heat” was the funding of road closures, and board members agreed there needed to be more clarity and a stronger criteria in order to make better decisions in the future. They planned to attend a workshop to discuss how best to move forward.

PHOTO: Steampunk has been a recipient of the major events fund. File Photo