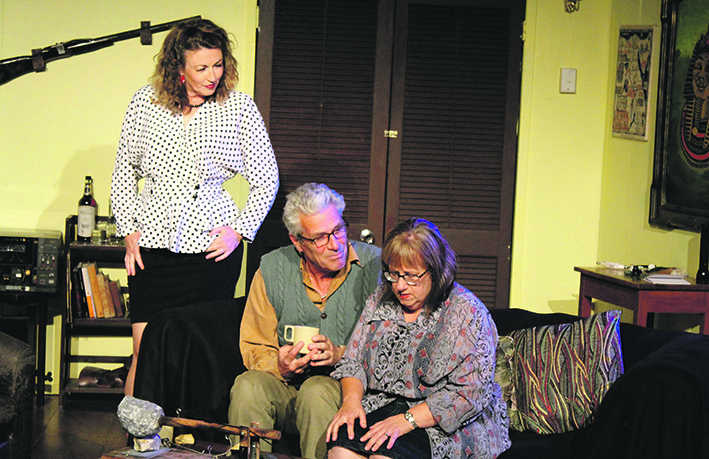 REVIEW: I’ll Be Back Before Midnight
By KELLEY TANTAU

There were frightened jumps, then muffled laughs, as audience members willingly went out for a night of “scary entertainment” at the hands of Thames Music and Drama.
What resulted was a thriller play that increased in tension from the first scene, and provided theatregoers with a psychological whodunnit that unraveled across two acts with efficient mystery.
The opening night of I’ll Be Back Before Midnight by Peter Colley on April 22 saw a four-person cast – the timid Jan (Hilary Rodley), Bee Gees fan Greg (David Singleton), charismatic Laura (Erin Wigley), and whiskey-drinking George (Stuart Floan) – fill the nostalgic cottage set out in rural countryside.
Jan had recently come out of hospital, and spent the duration of the show doubting her consciousness and tugging at the sleeves of her dressing gown.
Her husband, Greg, tried to help ease her anxious mind – before the arrival of his manipulative and beautiful sister Laura, that is.
George, the owner of the farmhouse, was a nonchalant, whiskey-drinking teller of horror stories, who casually mentioned to the fearful Jan frightful tales of runaway leopards and chainsaw-wielding head-loppers.
The combination of all these things allowed the show to play out as one would expect, with an introduction, a hint of deception, building intensity, a climactic event, a red herring, and a resolution. There were also some unexpected laughs, as well.
It made for a more than watchable performance, and the actor’s abilities were only strengthened by an impressive set constructed by Norm Hammond and Paul Silvester.
Kudos must also go to the special effects, sound, and lighting team of Martin Rodley and Tina Haakma. From the chimney gag in the opening scene, to the use of black-outs and hand-held lighting, not to mention the foreboding use of a heartbeat, the effects were a crucial element to the play and they were done to an impressive standard.
Directed by Asha Peppiatt, I’ll Be Back Before Midnight brought all the wonderful things of theatre together: a cast who stood out as individuals and an ensemble, set and costuming that evoked a certain aura, and special effects that immersed an audience enough to scare the bejeezus out of them.
DETAILS: I’ll Be Back Before Midnight’s final three shows will be on April 29-30; and May 1 at 7.30pm at Tararu Cultural Centre, tickets $25pp. Tickets: www.thamesmad.co/music-hall.