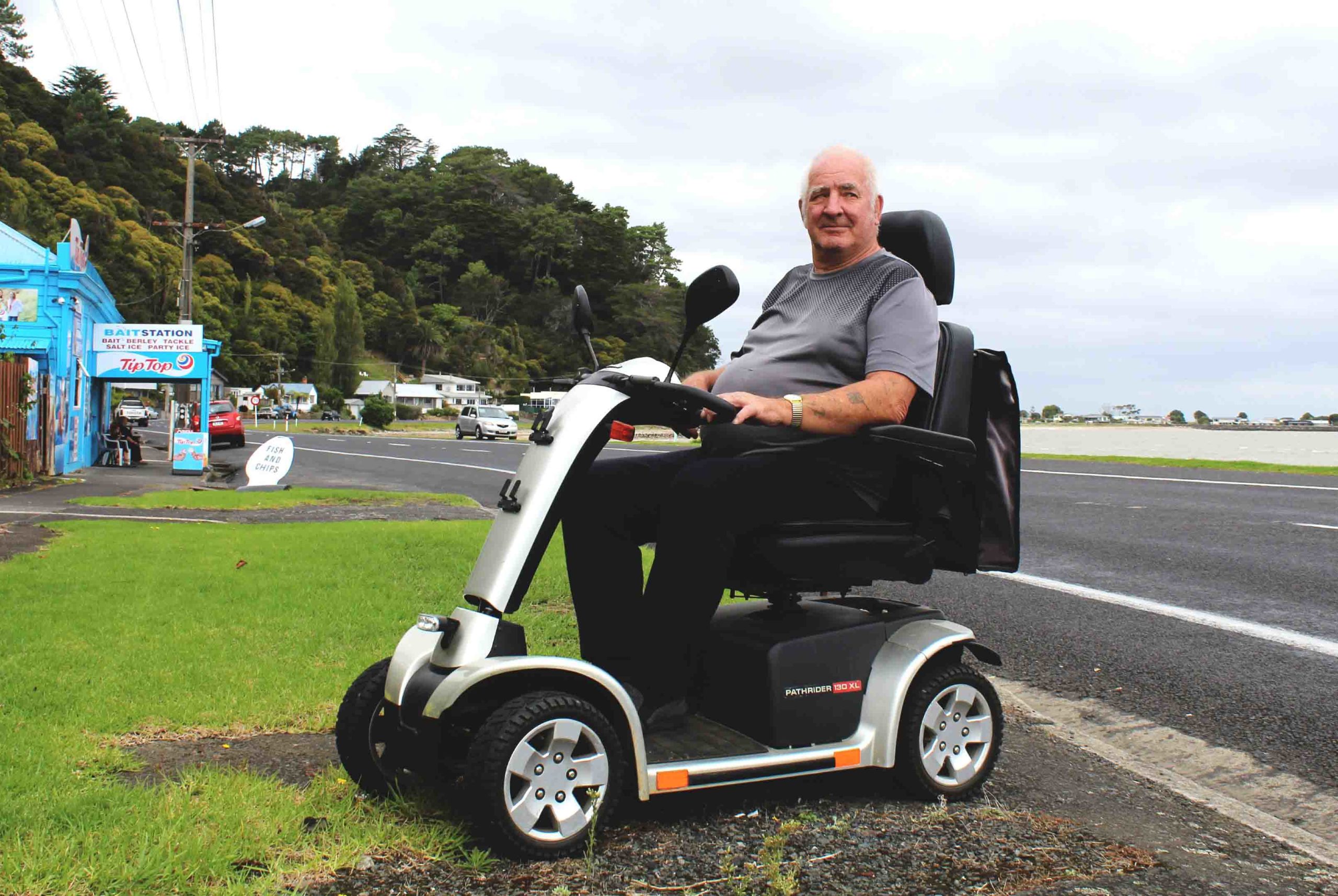 In a Valley Profile series about our roads, KELLEY TANTAU chats to Tararu locals, who are concerned high speeds will end in tragedy.

A beach-side road has long been a bugbear for one Thames Coast resident, who is begging for a speed limit reduction before someone gets hurt.
Graeme Harvey has lived in Tararu, north of Thames, for eight years, returning to the Coromandel after a life spent driving long-haul.
As a former truckie, he’s witnessed fatal incidents involving children, and he fears the 70km/h speed limit and blind corner near the Tararu Store is an accident waiting to happen.
“The Thames Coast Rd has been a hazard for as far back as I can remember… and I see now what I saw back then – caravans or cars with boat trailers not pulling over, causing other drivers to get angry, speed, and pull out when they shouldn’t,” he says.
“We’re out here asking for a 50km/h speed limit from Totara to the Tararu Bridge.”
The road into Tararu along the Pacific Coast Highway is 70km/h until it reaches the sailing club, where the speed limit is reduced to 50km/h. It then turns into a 100km/h zone after passing the Sunset Motel at the north end of the village.
Mr Harvey says the problem is people not slowing down or using the stretch as an opportunity to pass other drivers.
“People don’t know how bad it gets here.
The other day, there was a car with five others ahead of it, he pulled out in the 50km/h zone and passed all five of them. I couldn’t believe it.”
Mr Harvey says he worries for the elderly population of Tararu, as well as its young residents.
“It’s not only my grandchildren, it’s other children in the neighbourhood that have to walk down this road.
“I’d hate to get a call, or come home to find a queue. I hate that thought.”
Tararu Store manager Parminder Kaler said people have told him they don’t stop at the store due to the high-traffic road it sits on.
“Sometimes I can’t get across the road because the traffic is massive, and in the morning, cars go 100km/h through here,” he said.
He supports Mr Harvey’s request for a reduced speed limit.
The New Zealand Transport Agency says they’re looking into it.
According to Waka Kotahi NZ Transport Agency’s road traffic crash database, there had been no fatal or serious crashes on Tararu Rd/SH25, between Dickson St and Tararu Creek Rd, from 2018 to March 3, 2021.
There had been one minor and one non-injury crash in 2018, two minor crashes and one non-injury crash in 2019, and one minor crash in 2020. The 2020 and 2021 data is incomplete.
NZTA is currently identifying roads where safer speed limits could make a big difference in preventing deaths and serious injuries, a spokesperson told The Profile.
State Highway 25, from Kōpū to Thames Coast and around the peninsula to Tairua, had been identified as one of them. A technical assessment on the current speed limits for State Highway 25 has been completed.
“The technical assessment considers crash history, average vehicle speeds, volume of vehicles on the road, and development of surrounding areas, and helps us to determine if changing the speed limits is the best thing to do to improve road safety, where new speed limits might begin or end, and if any other safety improvements might be needed,” the agency says.
“The technical assessment will be reviewed, and if it determines the current speed limits are not safe and appropriate, further steps need to be completed before changing any speed limits, including engagement and consultation with the community.
“As part of this we will work closely with local government, our road safety partners, and the community as local knowledge is vital to our speed review process.”