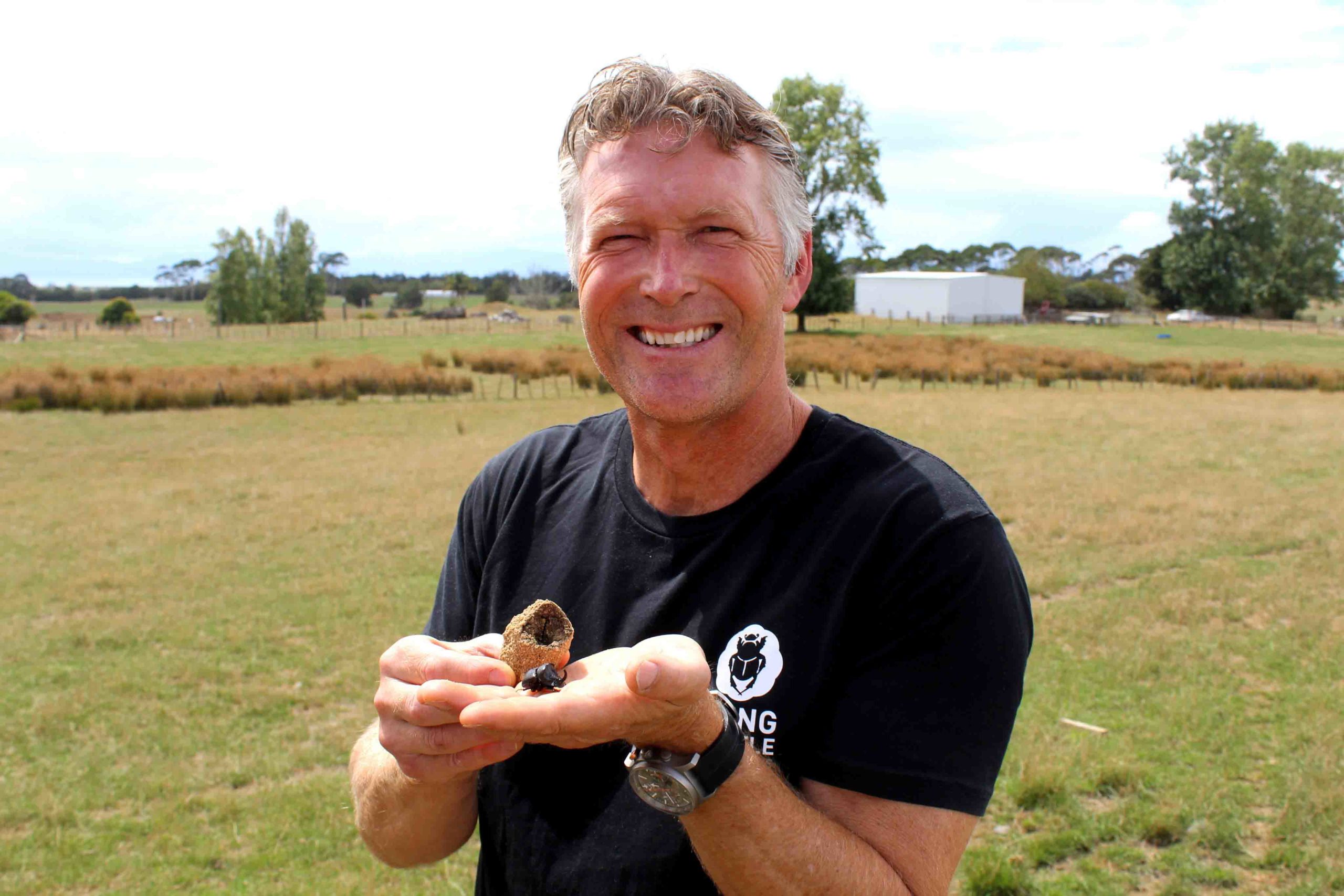 The respected symbol of an Egyptian God was now needed as “clean-up crew” for New Zealand farms, says one researcher eager to keep the spotlight on a pastural janitor, the dung beetle.
Inside a woolshed in Miranda last Thursday, Dr Shaun Forgie told farmers of the benefits of deploying dung beetles into the paddock.
Dr Forgie, who is the co-founder of Dung Beetle Innovations, was speaking at a NZ Landcare Trust event where nearly a thousand foreign beetle species were deployed on to the Miranda farm. Not only do the beetles mitigate the excessive accumulation of manure, but it they also improve water and soil quality, he said.
“[Dung beetles] are a common sense solution that has been absent ever since we brought livestock into New Zealand,” he said.
There were native dung beetles in New Zealand, he said, 15 species of them; however, they were all flightless and confined to live in closed-canopy native forests and highland tussock areas.
“None of these move into our pastoral environment,” he said.
Because of that, and because New Zealand had converted a lot of forests into open, pastural areas, problems in water and soil quality started to arise, he said.
“We brought livestock, but we didn’t bring the clean-up crew responsible for getting rid of that vast amount of sh*t that these animals produce every day. “The context is quite enormous when you think there’s about nine million beef and dairy cows in production annually in New Zealand, and each one of those sh*ts 10 times a day on average, and on average, each one of those poos sit there for about 30 days. Every day, there’s another 10, then another 10, then another 10,” he said.
“The amount of poo sitting on the pasture surface, rather than going into the ground, creates a major problem, one we’ve been having to manage through our farming systems ever since we brought livestock-minus-dung beetles.”
There were around 7000 different kinds of dung beetles in the world, In ancient Egypt, scarabs were symbolic of Khepri, the sun deity who was thought to have come into existence the same way a scarab beetle emerged from its dung ball, fully formed. In New Zealand, however, the appreciation for dung beetles was slow off the mark, Dr Forgie said.
“New Zealand is the last country in the world to actually get involved with importing dung beetles on to its pastural environment; we’re the last ones to get on board.”
He said in Australia, where between 1967 and 1982 they imported 55 species of dung beetles for release, the Western Australian Government estimated dung beetles to contribute $1 billion to the economy every year.
“We market our country as 100 per cent pure and clean, when we have 90 per cent of our water, with e-coli as an indicator, as contaminated,” Dr Forgie said.
“The Australian government sees the value in [dung beetles] and our government needs to get on board with this.”