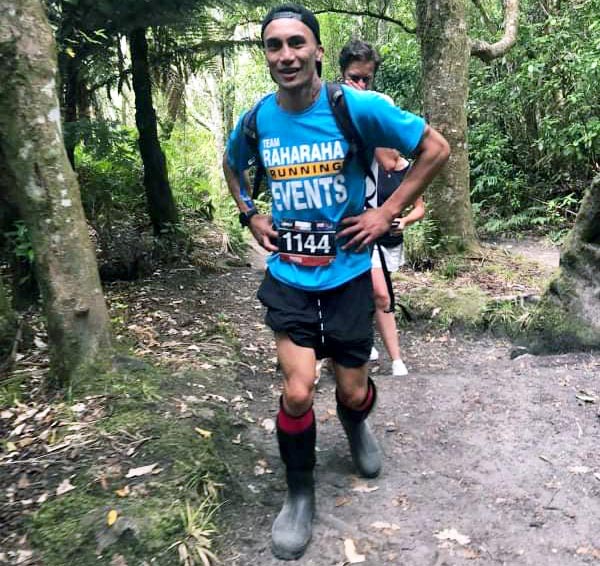 A man who suffered hallucinations and exhaustion during a 160km marathon for charity is already setting his sights on another.
Paeroa man Paora Raharaha ran the Tarawera Ultra Marathon last month in gumboots, finishing the race within 20 minutes of its cut-off time of 36 hours.
He also completed more than 1600 burpees along the way.
Now, Mr Raharaha wants to create and conquer his own Guinness World Record.
“Originally, I wanted to attempt the Guinness World Record for the fastest marathon in gumboots, but I’ve decided to create my own and run in gumboots and do 1000 burpees which I will be doing some time later this year,” he said.
Mr Raharaha’s decision to couple marathons with the unorthodox footwear came after he ran the Auckland ASB Marathon in gumboots late last year alongside Paeroa men Jack Keeys and Caleb Koia-Hamling.
However, the Tarawera Ultra Marathon was the “toughest” event Mr Raharaha had been to.
“I cried a lot… during, after, before,” he said.
“There was a lot going through my mind. I was tired, I wasn’t thinking straight, and I was forgetting to eat consistently, but leading up to the race, I thought: ‘No matter what, I’ll have to keep going’.
“One foot in front of the other.”
Mr Raharaha started suffering hallucinations around the 135km mark.
“I kept thinking the trees were people,” he said.
“There was one time when I thought I saw my best friend Caleb. When I realised it wasn’t him, I felt down for a little bit.”
He also slipped over a few times throughout the course, got lost, and needed a blister popped by a medic 30kms into the race.
But speaking to The Profile after the event, Mr Raharaha said his feet were okay, and as of February 26, he had raised just under $12,000 for the ‘Huntly Team Little Big Bots’.
The team is trained by Ants Pitman, and is made up of children between the ages of 5 to 12. The kids were taught how to build their self-confidence and self-esteem in the hope they would build a better future for themselves, Mr Raharaha said.
“I was thinking about them a lot. I told them that I would see them at the last aid station, and Ants said: ‘We’ll be there, no matter what’.
“That’s what kept me going.”

Goals and growth the ‘bread and butter’ of Auctus