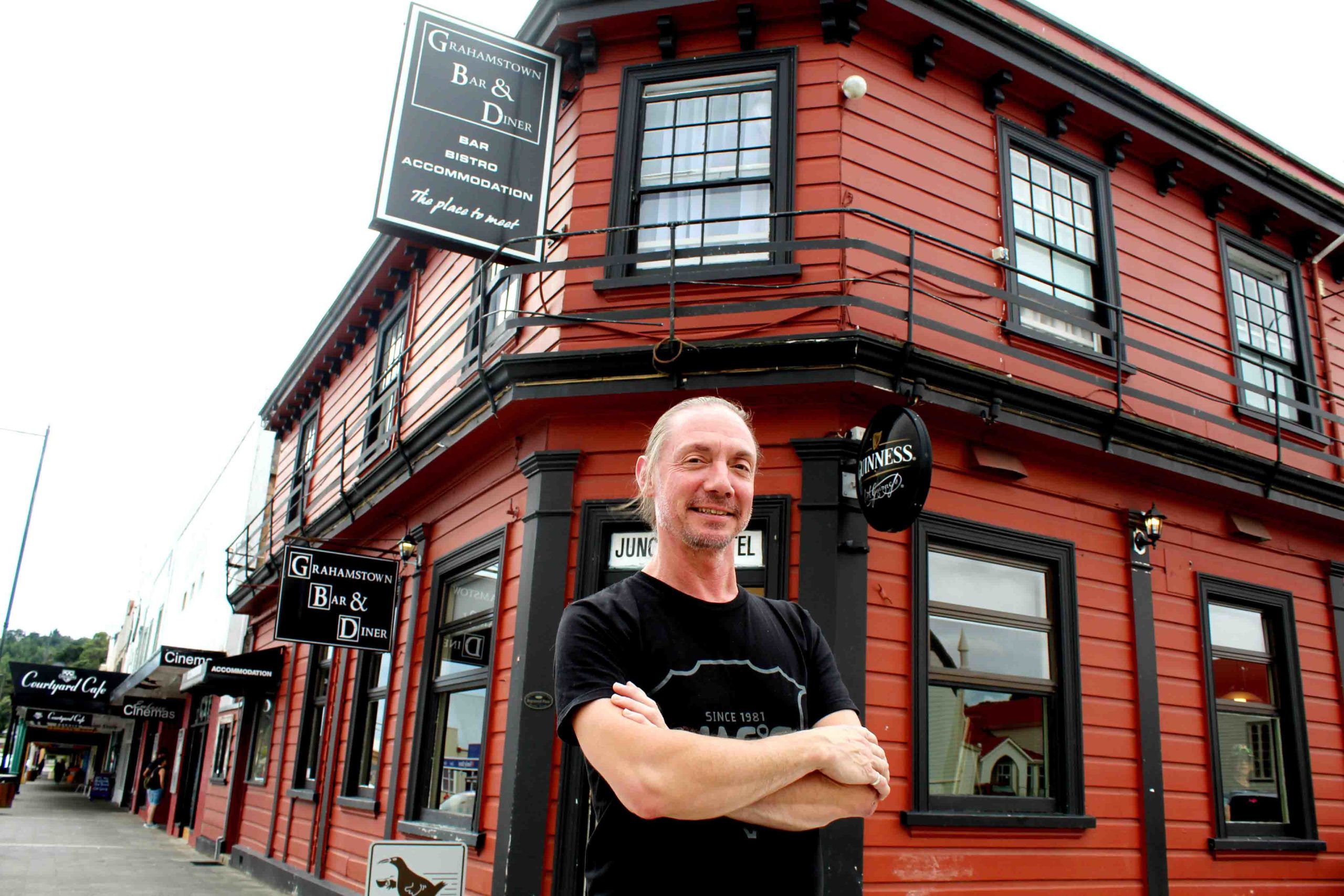 Inside the Grahamstown Bar and Diner features a weathered Rimu floor, wool press and wine barrel bar leaners and photos of historic Thames. On the walls there are also pictures from a local school and paintings by The Parawai Art Group; watercolour landscapes, figures and still lives.
It’s a Tuesday afternoon and most of the patrons are outside utilising a space provided by the district council, sitting beside palm trees and under sun umbrellas. Staff are working behind the bar – where new drinks such as organic kombucha and alcohol-free cider mingle with familiar favourites, craft beers, cocktails and an extensive wine list as well as espresso coffee. The menu is a medley of old and new, too, with “pub grub” such as fish and chips, pizza and burgers sitting alongside fresh salads, salmon and lamb rack.
Come May, Karl Edmonds will have spent 10 years at the Thames restaurant – affectionately dubbed The GBD – nine of them as its owner.
Among evolving with industry changes and people’s food habits, the past year saw the team facing the challenges of the Covid-19 pandemic. Still, The GBD remains an asset to the people of Thames; hosting meetings, Boomerang Bag sewing bees and supporting numerous causes, festivals and events. “We’re just giving back to the community that has given to us,” Karl said.
“I’ve worked in hospo for 30 years, and I’ve always loved giving good customer service, good food and wine, and a fun environment.”
Born in Taumarunui, Mr Edmonds’ family moved to Miranda when he was 10 and they have lived there ever since. Karl managed fine dining restaurants in Sydney, Australia, for eight years, and once he returned to New Zealand, he frequented The GBD for lunch.
“Mum and I would come here and have a wine and something nice to eat, and I asked for a job one day and was brought in as manager.”
One year later, he owned the place, and since then, he has seen a myriad of changes occur on his doorstep.
The maroon-coloured restaurant on the corner of Pahau and Pollen Streets hosts a monthly “wine club” evening once a month in its function room, where some of New Zealand’s leading vineyards present a range of their premium labels. On March 31, they will even host their first gin tasting evening with Grahamstown’s own Coromandel Distilling Company, with a selection of gins and gourmet nibbles prepared to match.
Karl also introduced the diner’s popular quiz nights, which have made a comeback following Covid-19 restrictions and now run every Tuesday from 6.30pm, for 30 weeks of the year.
“I’ve done a quiz night for eight years, and everyone has lots of fun,” Mr Edmonds said.
“The first place team gets a $50 voucher, the second team gets a $25 voucher, and the team that comes in last place gets a bottle of wine.”
The restaurant and bar is managed by Simon Rodley, who has worked at the GBD for seven years. The kitchen and menu is managed by Head Chef Riaan Le Roux, originally from Cape Town, South Africa, with a background as an executive chef. Riaan sources the finest produce when designing new menus and has a great team in the kitchen.
As well as being available for functions, meetings, and wedding and funeral catering, there is accommodation upstairs. Riaan’s wife Celeste manages the hotel.
“We’re more than just a restaurant,” Mr Edmonds said.
“The GBD is the place to meet.”

PHOTO: In May, Karl Edmonds will have spent 10 years at the Grahamstown Bar and Diner, nine of them as owner. Photo: KELLEY TANTAU