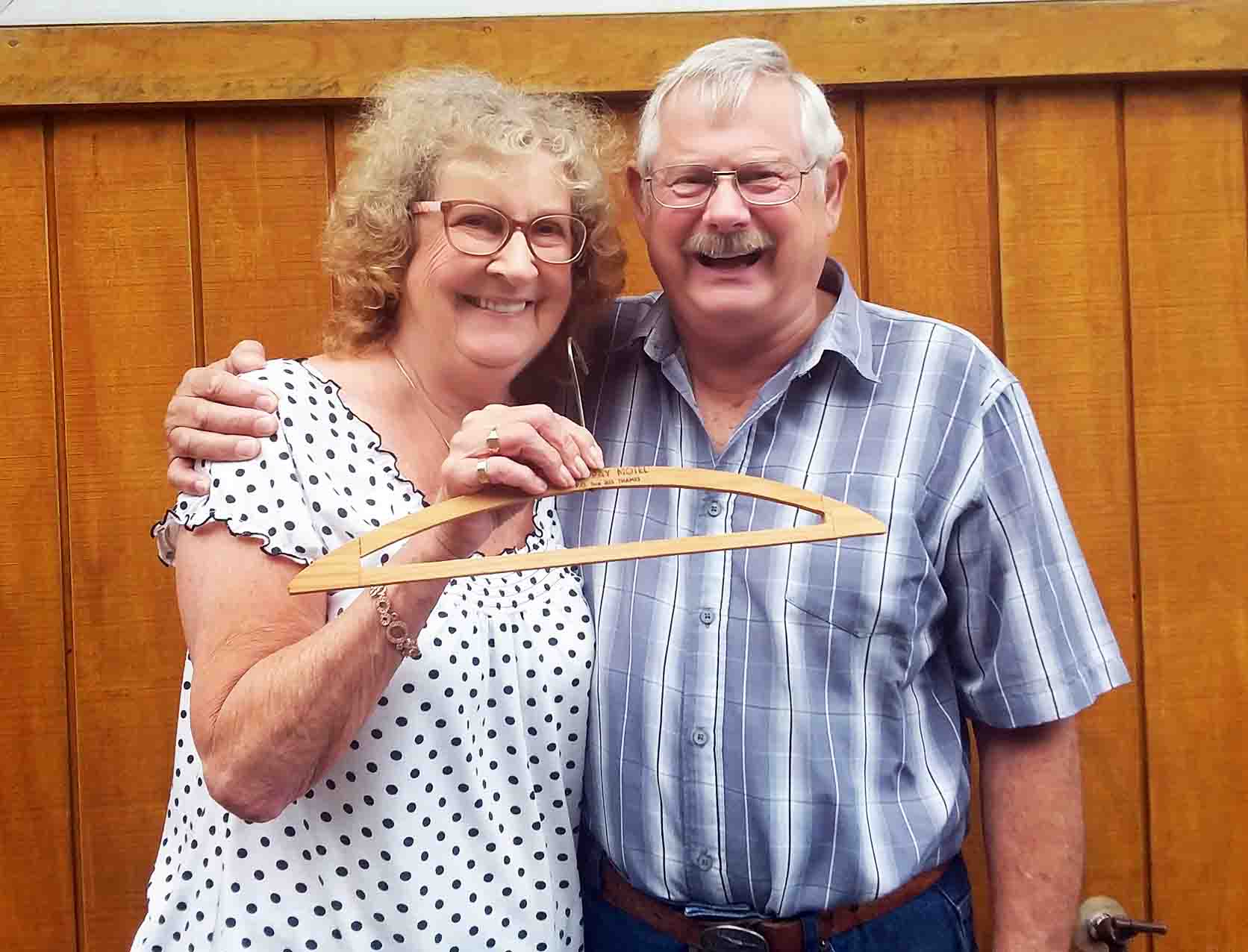 A motel coathanger innocently packed into a guest’s suitcase spent the next 47 years of its life in two North Island cities, witnessing a family grow from its wardrobe.
But this month, it made its return back home to the Seaspray Motel in Waiomu.
In 1974, Julie and Dave Wharram and their two-year-old son Matthew visited the Seaspray Motel for a holiday.
When their four-day trip came to an end, one of the motel’s coathangers was mistakenly packed in the Wharram’s suitcase and taken back to Auckland.
“I remember when we got home, I said to Dave: ‘I’ve got one of their coathangers’.
“We left it at that,” Julie said, “and it was just a few weeks back when I was having a bit of a clean out and came across it, when I said to him: ‘I think it’s time we returned it.
“‘It needs to go home to the Seaspray’.”
The pair, now living in New Plymouth, went back to the motel on March 1-2, and returned the coathanger with owners Katherine and John Tizard, marking the end of the coathanger’s 47-year stay with the Wharrams.
“Katherine said she was going to get it framed, and thanked us for being honest and returning it after all these years,” Julie told The Profile.
“It was such an awesome holiday that we’ve never forgotten, and we’ve talked about it many times.”
Julie said the coathanger itself had seen many changes when it came to the family’s fashion.
“In Manurewa, it was in the wardrobe where my little boy’s clothes were… and some of his little suits and that were hanging on it.
“When we moved here and he’d grown up, it was still in his wardrobe and of course had all the ACDC shirts hanging on it. Then, when he left home, it was sitting in the wardrobe with a couple of my older bits of clothing that I haven’t had the nerve to throw out.
“So it has seen many fashions over the years,” she said.
Julie said the coathanger had been a lovely keepsake for close to five decades, which was what kept her from throwing it away, but she felt pleased it had now been returned.
“I had felt a little guilty about having it, but it’s now back home where it should be.”

Julie and Dave Wharram have returned a coathanger to the Seaspray Motel, after mistakenly taking it home 47 years ago. Photo: SUPPLIED/KATHERINE TIZARD

‘Slow down, phone down, buckle up’ this Easter