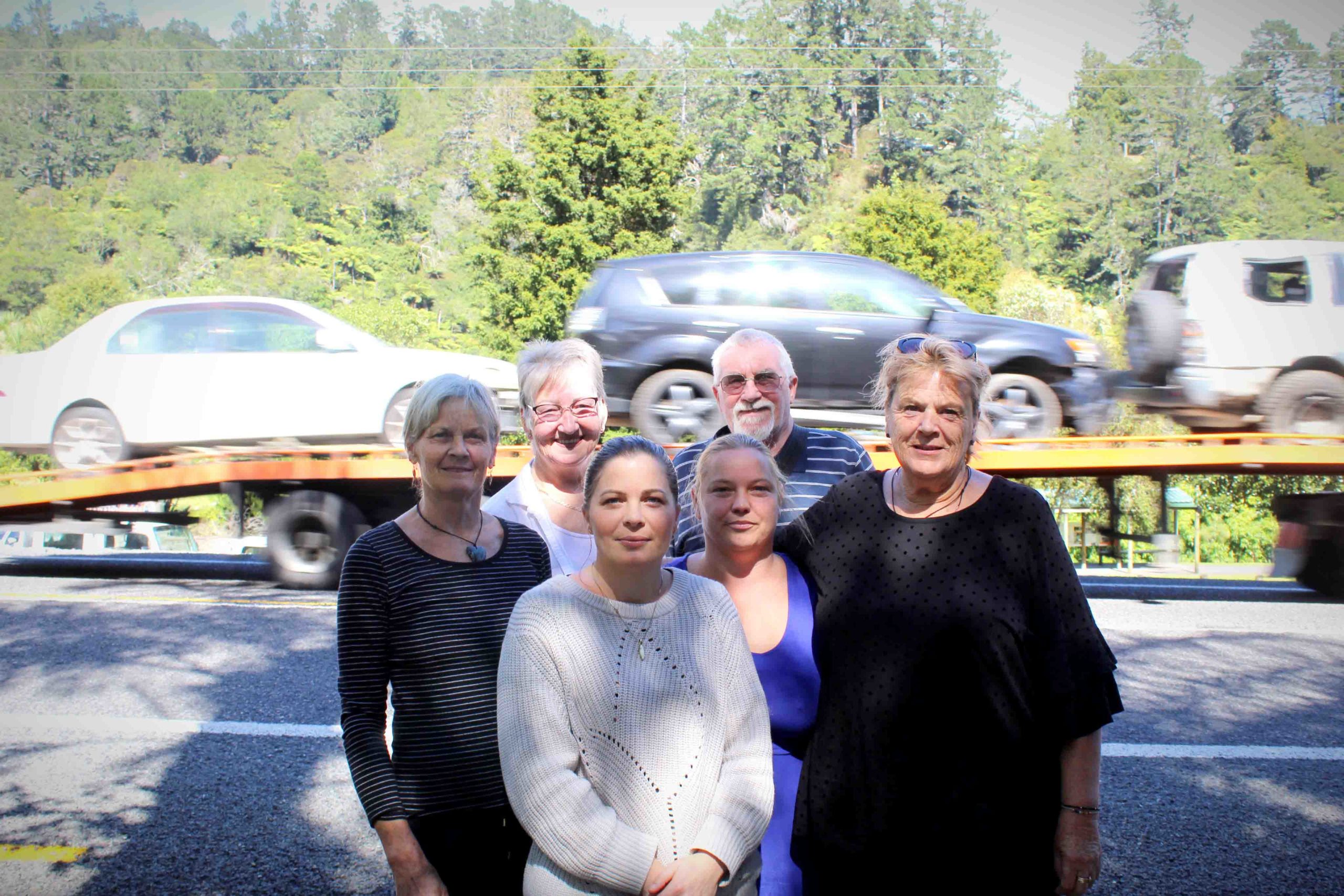 The residents who live and work off State Highway 2 in the Karangahake Gorge carry scissors in their car in case they ever need to cut their seatbelt after a crash.
When they go around a tight bend, even in the middle of winter, they wind their windows down; an escape route in case they tumble off the edge. These actions have been embedded into the mindset of the gorge locals after years of witnessing campervans roll, trucks tip, and vehicles collide.
“You have to prepare yourself every time you come through here.”
Leanne and Karen Drake, Anita Roest, Pauleen Allen, Angus McConnell, Tina Dion, Minnia Jae, Moira Pavlik, and Julie and Dave Hallums are all residents and workers from around SH2 in the Hauraki.
Around 15 years ago, some of the group successfully advocated to reduce the gorge’s speed limit from 100km/h to 80km/h, but are now calling for the area surrounding The Talisman Cafe to be reduced to at least 60km/h.
The road is a recipe for disaster, they say, with tight corners, blind spots, no signage, and insufficient barriers adding insult to injury.
In the past five years alone, Waka Kotahi NZ Transport Agency [NZTA] figures show there have been 68 crashes in the Karangahake Gorge. This includes one fatal crash, two serious, 18 minor and 47 non-injury crashes.
“If you were to put up crosses for how many crashes there have been through here, people would actually take notice,” Leanne says. “There are accidents that happen out here nearly every day that don’t get reported to police.”
Leanne works at the Talisman Cafe and, like her neighbours, has witnessed fatal crashes and near-misses. There have been three-car pile-ups, crashes involving tourists, and campervans rolling into oncoming traffic. Once, a man pulled his car over on the side of the road with his hazard lights on, only for a truck to drive past and swipe the vehicle, taking the car door completely off its hinges.
“If that man had put his foot out, he would’ve been gone,” Leanne says.
The residents want to see collaborative action between Hauraki District Council and NZTA, and for the speed to be reduced to 50km/h from before School Rd in the east, and 60km/h before Rahu Rd in the west. Other solutions such as a solar-paneled speed sign, a speed camera, more signage, better parking, and a pedestrian underpass would be ideal, while paid parking at the Karangahake Gorge reserve could be used to pay for roading upgrades, the locals say.
“For such a big tourist attraction, they should have parking meters across the road with a decent time limit, and that money should be invested back into right here,” Leanne says.
“Don’t get us wrong, we want the people, but we want to make it safe for them,” Anita adds.
Hauraki Mayor Toby Adams agrees with the locals’ concerns. In fact, the highway would be better suited as a scenic route, he says, with intervals of 50km/h speeds.
“We’ve got some of the most iconic walks, particularly in the early part of the gorge, and the traffic build-up is horrendous with people parking all over the place. So, safety-wise, I honestly think that there’s about three parts of the gorge that should be reduced to 50km/h: the Talisman is one, Waikino is another, and at the Waitawheta Bridge,” he says.
Mayor Adams isn’t against the installation of a speed camera, and agrees there needs to be more parking at the reserve. Council has even investigated parcels of land that could achieve this, he says.
However, he doesn’t agree with implementing parking meters at the reserve to pay for road safety upgrades, saying that would close-off “a fair chunk of New Zealand” to the gorge’s amenities.
“Waka Kotahi [NZTA] has done a whole business case on what it’d look like to make that trip between Waihi and Paeroa better and safer, but it came at a huge cost, somewhere around $42m dollars,” he says.
“It is a hard one, and I don’t know the answer… but I can see speeds dropping all over New Zealand. Our roads are getting busier and busier, and we’ve got to get better at the way we shift our goods and our people.”
NZTA says current limits “are not safe for the way people use the road”, so is reviewing the speed limits along SH2 from Mangatarata to Katikati.
They are calling for feedback from users of the road, which will contribute to new proposed speeds to be formally consulted on later this year.

PHOTO: Back: Julie and Dave Hallums, and front: Karen and Leanne Drake, Anita Roest and Pauleen Allen, who want a speed reduction in the gorge. Photo: KELLEY TANTAU

April Steampunk festival ‘may be the last’