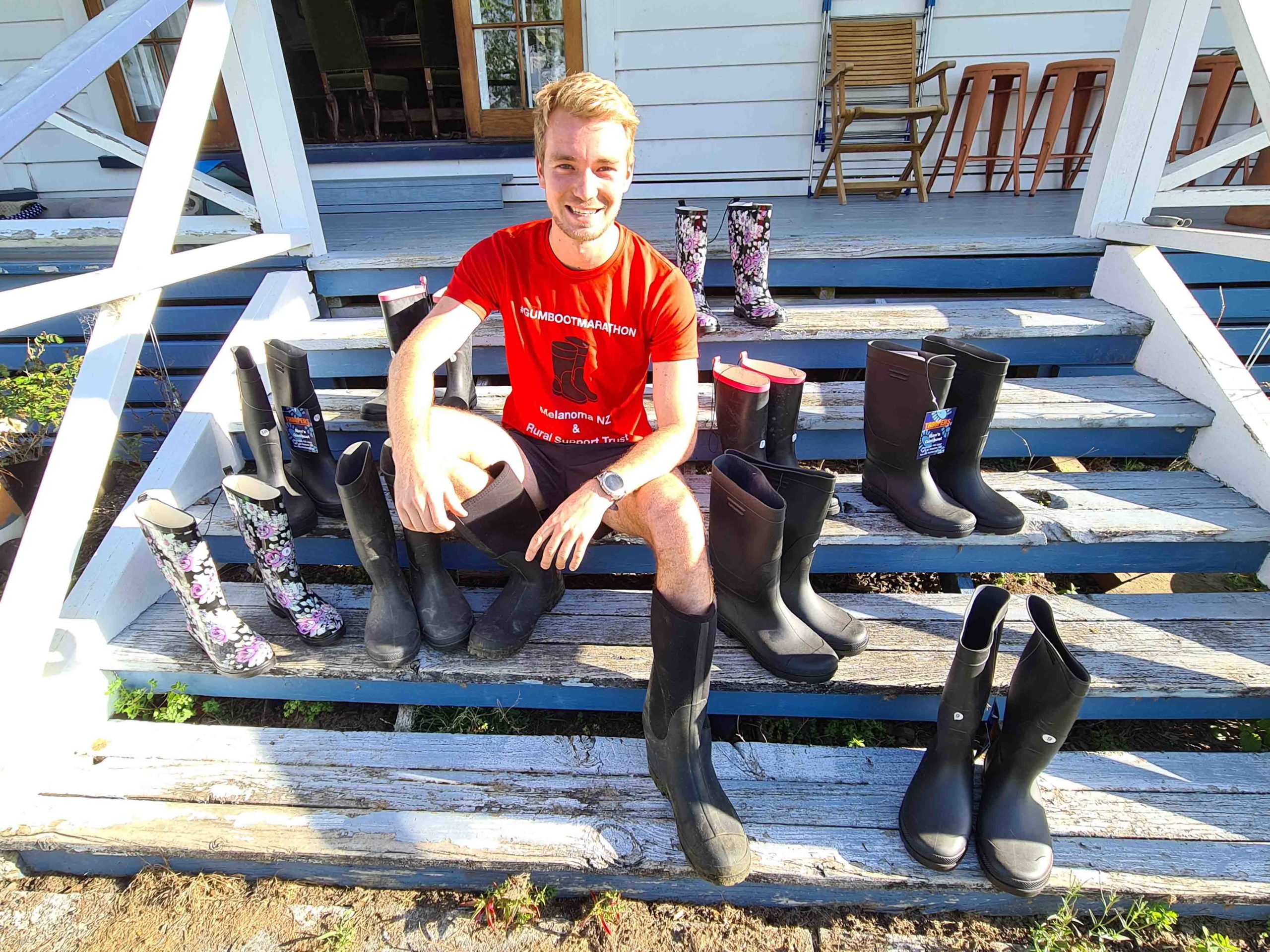 Jack Keeys knows all too well the risk of working outdoors.
Despite his consistent safety around the sun, in 2019, the 26-year-old from Paeroa was diagnosed with melanoma.
“I’m outdoors a lot,” he said. “I had always considered it a possibility… but I was especially surprised due to my relatively good sun safety growing up.
“It was a scary few months going through surgeries and waiting for results, and I lost a sense of invincibility I think we all have until something like this happens.”
After two surgeries, Mr Keeys was in the all-clear and, in November last year, committed to running the entire Auckland Marathon in bright red gumboots, raising just under $23,000 for Melanoma NZ and Rural Support Trust.
His late-father Kevin Keeys, who died from skin cancer at just 40 years old, was his inspiration. The red gumboots worn by Jack Keeys throughout the 42km marathon now rest at his Dad’s grave site.
“It was definitely the deserving resting place for my boots, and a gift back to him for inspiring me,” Mr Keeys said.
“Dad was actively involved in the community from high school and was part of pioneering new cancer treatments which have gone on to help thousands of others.”
Mr Keeys has opted for the “gumboot marathon” to become an annual tradition, even though two toe nails fell off in January – 100 days after the race. November was the perfect time to raise awareness about both sun safety and mental health in the lead up to summer, he said, but it was “critical” for there to be a greater awareness of sun safety in rural communities year-round.
“Many farmers may have fallen into an unhealthy relationship with the sun, allowing themselves to burn, or believing a tan will protect them,” he said.
“My key bit of advice is to go out and buy several containers of your favourite sunblock and leave them in key places to build good routines; on the farm, places such as a quad bike or motorbike, tractor, workshop, or dairy shed.
“That way you can build a habit of applying sunblock when you enter that area. It’s really easy to get caught out if you don’t be strict on yourself to set good habits,” he said.
“Perhaps controversially, my second piece of farm advice is to avoid those stubbies and singlets; to opt instead for cool, loose fitting but more covering items of clothing for the farm when you’re going to be outside for long hours.”
Mr Keeys’ family farm in Paeroa spans 120-hectares, and when he’s living and working at Auckland in the agri-food division of KPMG, he said he was just as mindful of the sun’s rays.
He also stressed the importance of getting annual skin checks.
“Skin cancers such as melanoma can vary in aggressiveness but can be extremely difficult to detect. The only way to get some certainty is to get annual full body checks,” he said.
“My advice is about building good sun habits – even if it does take a few extra minutes from you each day between jobs, it could just add many extra years to your life – and that’s a pretty easy trade-off to make.”