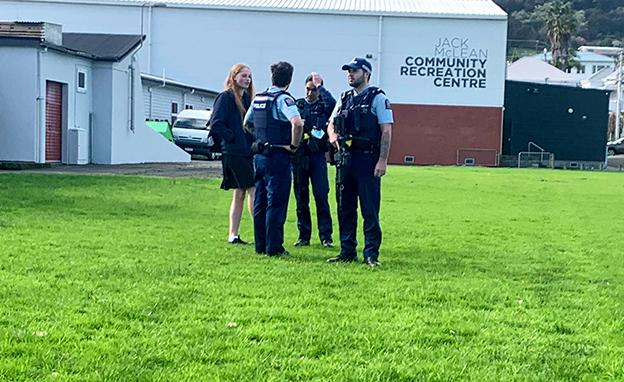 The principal of a school targeted by a bomb threat last week has praised his staff and students for “coping well” during the “distressing” situation.
Thames High School received a “low risk” bomb threat made via phone on July 26, resulting in a lockdown and an inspection from armed police.
Schools in Matamata, Cambridge and Gisborne also received the same threat. Two days later, Police made further enquiries after more threats were made towards schools in Masterton, Kaikoura, Greymouth, Queenstown, Levin, Whanganui, Rolleston, Takaka, Geraldine, Dunstan, Ashburton and Palmerston North.
Thames High principal Michael Hart told The Profile the threat was “not very specific” and because they were not the only ones affected, they believed it was likely a “poorly judged hoax”.
“Like all threats though, we treat them seriously as safety is our priority.”
The alarming phone call was received late-morning on Tuesday, July 26. Staff called Police, who advised the school to go into lockdown. Police were on site within 10 minutes, and after inspecting the external areas of the school, students and staff were evacuated in order for the internal buildings to be checked.
They received “full clearance” from Police by 2pm.
The following day, Mr Hart said students and staff had “returned to business as usual”.
“We are confident and pleased that the worries of yesterday have been well understood and put into perspective. The tone of the school is settled and it was great to check in with students and staff and have lots of positive responses.
“It has helped knowing that there was no reason that we were amongst the affected schools, so there was [an] understanding that it appeared to be a random situation,” he said.
Mr Hart said it was “great” to see his older students helping the “younger ones”, and parents being patient and understanding.
All things considered, he said, the college’s processes were well followed.
“Our processes worked really well, but like all occasions where a real situation evolved, we will take any lessons learned and make improvements.
“One of the challenges in this situation… was we moved from a regular lockdown to one where we were on the field, and that created communication and co-ordination issues that [we] might not otherwise have faced,” he said.
“Not to mention the mud!”
Police have made inquiries into the threats and, in a statement, said it believed there was no specific safety risk.
Investigations into the source of the threats are ongoing.

Learning to live alongside fur seals